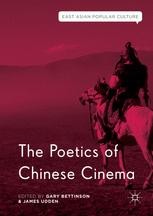 The Poetics of Chinese Cinema

This book examines the aesthetic qualities of particular Chinese-language films and the rich artistic traditions from which they spring. It brings together leading experts in the field, and encompasses detailed and wide-ranging case studies of films such as Hero, House of Flying Daggers, Spring in a Small Town, 24 City, and The Grandmaster, and filmmakers including Hou Hsiao-hsien, Jia Zhangke, Chen Kaige, Fei Mu, Zhang Yimou, Johnnie To, and Wong Kar-wai. By illuminating the form and style of Chinese films from across cinema history, The Poetics of Chinese Cinema testifies to the artistic value and uniqueness of Chinese-language filmmaking.

Gary Bettinson is Senior Lecturer in Film Studies at Lancaster University, UK and author of The Sensuous Cinema of Wong Kar-wai: Film Poetics and the Aesthetic of Disturbance (Hong Kong University Press), and chief editor of Asian Cinema journal.

James Udden is Associate Professor of Cinema and Media Studies at Gettysburg College, USA. He has published extensively on Asian cinema including the book-length monograph, No Man an Island: The Cinema of Hou Hsiao-hsien (Hong Kong University Press). His current book project concerns the improbable, parallel rise of Taiwan and Iran in the international festival world starting in the mid-1980s.

“A refreshing look at film aesthetics in mainland China, Hong Kong, and Taiwan from the 1940s to the present, The Poetics of Chinese Cinema redirects attention to rich layers of cinematic poetics and appreciates an amazing array of auteurist styles, traditional arts, institutional norms, regional practices, and digital innovations.” (Yingjin Zhang, Distinguished Professor of Chinese Studies and Chair of the Department of Literature, University at California, San Diego, USA)

“Some of the most significant scholars in the field turn their perceptive collective eye toward the sparkling cinematography, complex editing and challenging long-takes of the cinema of the PRC, Hong Kong, and Taiwan. An absolute must for anyone interested in film aesthetics and Chinese film culture.” (David Desser, Professor Emeritus of Cinema Studies, University of Illinois, USA)