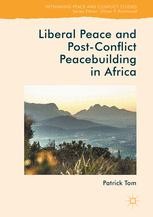 The book makes theoretical and empirical contributions to recent debates on hybrid forms of peace and ‘post-liberal’ peace. In applying concepts of power, hybridity and resistance, and providing different kinds of hybridity and resistance to explore post-conflict peacebuilding in Sierra Leone, the author makes an original contribution to existing literature by providing various ways in which power can be exercised not just between locals and internationals, but also among locals themselves and the nature of peace that is produced. This volume provides various ways in which hybridity and resistance can be manifested. A more rigorous development of these concepts not only offers a better understanding of the nature of these concepts, but also helps us to distinguish forms of hybridity and resistance that are emancipatory or transformatory from those that result in people accommodating themselves to their situation. This book is an invaluable resource for scholars and students of peacebuilding, peace and conflict studies, International Relations and African Studies, and practitioners of peacebuilding and post-conflict reconstruction.

“Tom’s book is timely, given the global upheavals that are contributing towards the fragmentation and disruption of the liberal orthodoxy that has, during its ignoble and illegitimate reign of the past two decades … . Liberal Peace and Post-conflict Peacebuilding in Africa is a necessary wake-up call and palliative to the tendency – particularly among the self-righteous and proselytising peacebuilders from the global North – to replicate the dated prescriptions of a moribund and anachronistic liberal peace agenda.” (Tim Murithi, South African Journal of International Affairs, Vol. 25 (1), March, 2018)

“This is an important book, and essential reading material both for peace studies scholars and for those focussing upon the specific case of Sierra Leone. By focussing on the key concepts of power, hybridity and resistance, Patrick Tom has provided an analysis that not only outlines the complexities of contemporary peace but that importantly highlights the role of marginalised actors in such processes.” (Ali Watson, Professor of International Relations, University of St Andrews, UK)

“By using Sierra Leone as a case study, Patrick Tom profoundly contributes to our understanding of how power can be effected at different levels to promote a sustainable peace. It has long been understood that international actors need to think through the local context and local requirements and the essentials of the type of peace that is shaped as local and international actors interact. Tom’s book clearly adds to this important debate.” (Ian Taylor, Professor in International Relations and African Political Economy, University of St Andrews, UK)

“Primarily, Patrick Tom’s book is about power and agency. Many scholarly and policy considerations of post-conflict societies concentrate on institutions and structures. What has become clear from a number of post-conflict sites, and as Patrick Tom makes clear from his case study of Sierra Leone, people are innovative, entrepreneurial, awkward, and capricious. Thus, ambitious plans by international peacebuilding actors are often frustrated, delayed, or derailed. This accessible and highly scholarly book makes clear that the gap between peacebuilding intentions and on-the-ground realities is a zone of hybrid polities, pushing boundaries and allowing new forms of peace, authority and agency. The book is highly recommended to all students of peacebuilding.”(Roger Mac Ginty, Professor of Peace and Conflict Studies, University of Manchester, UK)