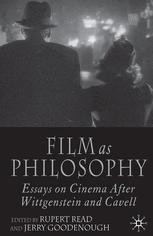 Essays in Cinema after Wittgenstein and Cavell

A series of essays on film and philosophy whose authors - philosophers or film studies experts - write on a wide variety of films: classic Hollywood comedies, war films, Eastern European art films, science fiction, showing how film and watching it can not only illuminate philosophy but, in an important sense, be doing philosophy. The book is crowned with an interview with Wittgensteinian philosopher Stanley Cavell, discussing his interests in philosophy and in film and how they can come together.

'A collection of articles on individual films both interesting in itself, and fascinating as a sign of the fruitful and widespread impact on thinking about movies that Stanley Cavell's work is beginning to have. To top it off, there is a conversation with Cavell (conducted by Andrew Klevan) that is, by itself, worth the price of admission.' - Professor Stanley Bates, Department of Philosophy, Middlebury College, USA

'...a fine collection of writings by a new generation of philosophers interested in looking anew at film as philosophical practice. Rather than merely using cinema to illustrate classic philosophical positions, each endeavours to see film as a potential source of philosophical insight. In this respect it represents a wholly new view of the relationship between image and thought.' - Dr John Mullarkey, Department of Philosophy, University of Dundee, UK

'Building on the work of Wittgenstein and Cavell, this anthology draws our attention to ways in which film can be understood as philosophical texts and movie-goers can engage in philosophical investigation. In an assessable format, each author expertly guides us through issues related to memory, identity, reality and appearance, myth, the nature of self, free moral choice, Otherness, and conditions for personhood. In these pages are puzzle-games, jokes and riddles, feminist nightmares, and food for thought surrounding male violence, cannibalism, and myriad narratives about voice, voicelessness, dislocated voices, and the concept of order. We are drawn into discussions about camera angles, color, light and dark, voiceovers, pacing, and music.

The topics raised in these pages are so compelling they call for course development. Philosophical ideas are extended as they are placed in context of the relatively new medium of film. As we learn from these authors, by learning to 'read' films, the potential exists to expand the focus of philosophical engagement from university classrooms to the more public space of the movie theatre. As David Ruben claims, films 'tempt us toward philosophical insight'. Film as philosophy is an idea, and a book, that can be easily embraced.' - Professor Kristin Congdon, Department of Art and Department of Philosophy, University of Central Florida, USA