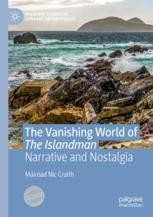 The Vanishing World of The Islandman

Exploring An t-Oileánach (anglicised as The Islandman), an indigenous Irish-language memoir written by Tomás Ó Criomhthain (Tomás O'Crohan), Máiréad Nic Craith charts the development of Ó Criomhthain as an author; the writing, illustration, and publication of the memoir in Irish; and the reaction to its portrayal of an authentic, Gaelic lifestyle in Ireland. As she probes the appeal of an island fisherman’s century-old life-story to readers in several languages—considering the memoir’s global reception in human, literary and artistic terms—Nic Craith uncovers the indelible marks of Ó Criomhthain’s writing closer to home: the Blasket Island Interpretive Centre, which seeks to institutionalize the experience evoked by the memoir, and a widespread writerly habit amongst the diasporic population of the Island. Through the overlapping frames of literary analysis, archival work, interviews, and ethnographic examination, nostalgia emerges and re-emerges as a central theme, expressed in different ways by the young Irish state, by Irish-American descendants of Blasket Islanders in the US today, by anthropologists, and beyond.

Máiréad Nic Craith is Professor and Chair in Cultural Heritage and Anthropological Studies and Director of the Intercultural Centre at Heriot-Watt University in Edinburgh, Scotland, UK.

“In tracing the journey of a memoir from the sparsely populated Blasket Islands into the world, Nic Craith chronicles the acquisition of literary ambitions, editorial interventions and translational transformations. The originality of this contribution to literary anthropology resides in the skilled and surprising combination of angles through which we witness both the memoirist and those who have appropriated him.” (Regina F. Bendix, Professor of Cultural Anthropology/European Ethnology, University of Göttingen, Germany)

“The book represents an innovative work at the intersection of cultural analysis, literary anthropology heritage and island studies. It avoids the traps of previous approaches to islands as isolated spots stuck in the past. Nic Craith’s islands are places of living cultures, products of cultural policies and literary narratives, niches of transnational connections. This remarkable book will find readers among heritage experts, students of European cultures, but also all those interested in island imaginaries.” (Dr. Nevena Škrbić Alempijević, President of SIEF, Department of Ethnology and Cultural Anthropology, University of Zagreb, Croatia)

“Like all seminal works of literature, Tomás Ó Criomhthain’s autobiography is an inexhaustible resource, in which every generation and individual finds new meaning. In this work of sweeping comparative research, Máiréad Nic Craith demonstrates its continuing relevance equally to the world of the primitive and of the modern, as well as its centrality to the cultural values of the new Irish State.” (Seán Ó Coileáin, Emeritus Professor of Modern Irish, University College Cork, Member of the Royal Irish Academy, Ireland)

“The beauty of this book, crafted by Máiréad Nic Craith with sensitivity and dedication, is the insight provided into The Islandman (and its ilk) without claiming definitive answers or finally disambiguating its mysteries. It is a remarkable literary journey between island and world, tradition and modernity, materiality and nostalgia.” (Nigel Rapport, Professor of Anthropological and Philosophical Studies, University of St Andrews, UK)

“Ninety years after its first publication, Máiréad Nic Craith offers a welcome reexamination of Tomás Ó Criomhthain’s Blasket Island autobiography An t-Oileánach. Situating it within the wider contexts of early twentieth-century ethnographies and ethnographic theory, translation studies, the interface of orality and literacy, and the history of the book, Nic Craith shows how Ó Criomhthain’s book fits into the history of twentieth-century Western anthropology and literature.” (Catherine McKenna, Margaret Brooks Robinson Professor of Celtic Languages and Literatures, Harvard University, USA)