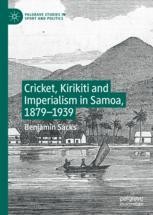 This book considers how Samoans embraced and reshaped the English game of cricket, recasting it as a distinctively Samoan pastime, kirikiti. Starting with cricket’s introduction to the islands in 1879, it uses both cricket and kirikiti to trace six decades of contest between and within the categories of ‘colonisers’ and ‘colonised.’ How and why did Samoans adapt and appropriate the imperial game? How did officials, missionaries, colonists, soldiers and those with mixed foreign and Samoan heritage understand and respond to the real and symbolic challenges kirikiti presented? And how did Samoans use both games to navigate foreign colonialism(s)? By investigating these questions, Benjamin Sacks suggests alternative frameworks for conceptualising sporting transfer and adoption, and advances understandings of how power, politics and identity were manifested through sport, in Samoa and across the globe.

Benjamin Sacks is an Honorary Research Fellow at the University of Western Australia.

“This is a fascinating study of cricket’s transformation as kirikiti in Samoa at the turn of the twentieth century.  Drawing on a range of historical and contemporary material read through the prism of ‘transculturation’, Benjamin Sacks offers a compelling examination of the cricket pitch as a contested space in colonial Samoa.  Sport is a significant part of everyday life in Samoa: in this illustration, kirikiti serves as a site for contemporary struggles over power and control, status and prestige, and labor and leisure. This is an excellent contribution to critical studies of globalized sport that anyone interested in Samoan history, cricket/kirikiti, and/or sport studies will enjoy.” (Dr Lisa Uperesa, University of Auckland, New Zealand)

“Ben Sacks’ subtle and multifaceted analysis of Samoan cricket powerfully disrupts the simplicities of the view of cricket as the quintessential imperial game exported and adopted throughout Britain’s empire and beyond. Grounded in the Samoan experience of multiple imperialisms and of fa’a Samoa, the Samoan way, Sacks shows how the objectives of different fractions of imperial power, the power of fa’a Samoa and the cultural materialities of the experiences of Empire saw ‘white flannels’ cricket adopted and also adapted to the requirements of fa’a Samoa with the new game, kilikiti. This is a significant contribution to histories of Empire, of sport and of thePasifika world that profoundly challenges many of the takens for granted of histories of sport and body cultures showing the importance of doing history with an anthropological sensibility and a decolonial outlook. It should be widely read and celebrated.” (Dr Malcolm MacLean, University of Queensland, Australia)

“A fascinating book that shows how Samoans took cricket, that most English of games, and made it into their own game, kiritkiti. Sacks demonstrates convincingly that a cricket pitch in the colonial Samoan islands was not just a cricket pitch but the site for a multidimensional contest that was as much political as cultural. He places kirikiti and its epic scale squarely within the history of protest against imperial exploitation of the Samoan archipelago and in doing so brings a welcome historical breadth and depth to a region where reporting of sport is dominated by a sensationalist emphasis on Polynesian athleticism in rugby and American football. Exhaustively documented and beautifully written this book will secure a place among the liveliest pieces of scholarship on this most-studied island group in the South Pacific.” (Professor Peter Hempenstall, University of Newcastle, Australia)

“This is a fascinating and important book. It casts entirely new light on the largely neglected history of kirikiti as a culturally and politically significant derivation from cricket amid Samoa’s highly contested colonial period. Simultaneously it provides a vital challenge to conventional and unidirectional accounts of imperial sporting diffusion that have been too prone to treat indigenous people as passive actors. The major themes of the book are sure to broaden the thinking of readers across many different geographical and sport settings, as what became of cricket on this ‘edge of Empire’ was quite unlike anything envisaged on the green and staid fields of England.” (Professor Greg Ryan, University of Lincoln, New Zealand)