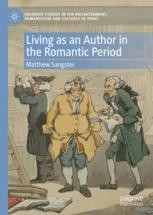 Living as an Author in the Romantic Period

This book explores how authors profited from their writings in the late eighteenth and early nineteenth centuries, contending that the most tangible benefits were social, rather than financial or aesthetic. It examines authors’ interactions with publishers; the challenges of literary sociability; the vexed construction of enduring careers; the factors that prevented most aspiring writers (particularly the less privileged) from accruing significant rewards; the rhetorical professionalisation of periodicals; and the manners in which emerging paradigms and technologies catalysed a belated transformation in how literary writing was consumed and perceived.

Matthew Sangster is Lecturer in Eighteenth-Century Literature and Material Culture at the University of Glasgow, UK. He has published widely on Enlightenment libraries, literary institutions, Romantic metropolitanism, media culture, and the affordances of Fantasy.

‘Living as an Author in the Romantic Period seeks to explode the notion that the late eighteenth and early nineteenth centuries oversaw a transformation of the literary economy into one in which professional authors could make a living exclusively off their writing. The author’s detailed work with neglected archives, especially publishers’ ledgers and the Royal Literary Fund papers, fuels several original claims about authorship in the romantic period. This is a book that will matter and possibly even be field-changing.’

‘Matthew Sangster’s new book provides a compelling revision of the standard account of the advent of professional authorship in the early nineteenth century. Using remarkable archive material from publishers combined with other institutional records folded into engrossing case histories of individual writers, Living as an Author in the Romantic Period reveals that the death of patronage has been prematurely announced. Even as writing became bound up with an array of networked cultural activities in a reconstituting field of literary production, marvellously brought to life in Sangster’s study, the career of the writer as a singular occupation remained out-of-reach for most of its aspirants.’

Book Title
Living as an Author in the Romantic Period
Authors
Series Title
Palgrave Studies in the Enlightenment, Romanticism and Cultures of Print
Copyright
2021
Publisher
Palgrave Macmillan
Copyright Holder
The Editor(s) (if applicable) and The Author(s), under exclusive license to Springer Nature Switzerland AG