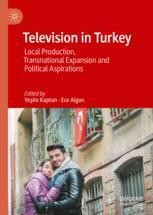 This edited collection takes a timely and comprehensive approach to understanding Turkey’s television, which has become a global growth industry in the last decade, by reconsidering its geopolitics within both national and transnational contexts. The Turkish television industry along with audiences and content are contextualised within the socio-cultural and historical developments of global neoliberalism, transnational flows, the rise of authoritarianism, nationalism, and Islamism. Moving away from Anglo-American perspectives, the book analyzes both local and global processes of television production and consumption while taking into consideration the dynamics distinctive to Turkey, such as ethnic and gender identity politics, media policies and regulations, and rising nationalistic sentiments.

Yeşim Kaptan is Assistant Professor at the School of Communication Studies at Kent State University, USA.  She was a visiting scholar at the Center for Advanced Research in Global Communication (CARGC) at the University of Pennsylvania, USA, and Aarhus University, Denmark. Her research focuses on transnational media, audience reception, global popular culture and consumerism.

“Despite various cybertarian prophets, television is becoming more and more powerful and international with each passing year. Old shibboleths about the imbalance of textual trade between Global North and Global South are compromised in the process. Yesim Kaptan and Ece Algan have produced a marvelous collection that places Turkey at the center of these developments. Their pathbreaking volume showcases television studies at its best, combining textual analysis, ethnography, and political economy in a powerful, arresting blend. Bravo!” (Toby Miller, Stuart Hall Professor of Cultural Studies, Universidad Autónoma Metropolitana—Cuajimalpa, Mexico)

“Television in Turkey, as a well-researched book full of compelling ideas,appeals to any reader interested in the institutional, industrial, generic and narrative structures of Turkish television. The chapters provide a deeper understanding of how national audiences, diasporic communities and expanding transnational societies use Turkish television output. A must-read book for anyone wishing to go historically and theoretically further into the vast Turkish televisual landscape.” (Dr. Sevilay Çelenk,  Academics for Peace scholar dismissed from Ankara University, Turkey,  and the author of Televizyon, Temsil, Kültür (Television, Representation, Culture)

“Television in Turkey is a brilliantly conceived book for this moment in the growth and expansion of national television into a powerful transnational force. Turkey, like Korea, is one of the latest powerful forces as television becomes increasingly transnational and global. Extremely well conceived and organized, the book covers the growth of Turkish television, its political and social impacts at home, in the Middle East, and increasingly throughout the globe, both through direct placement in schedules in places like Latin America but increasingly also in truly global actors like Netflix. The editors are very well versed in the issues and have selected an outstanding set of authors. Read it now only to better understand a major new force in transnational television, but also to see how our theories hold up as it is carefully examined.” (Joe Straubhaar, Professor, University of Texas, Austin, USA and Author of World Television)