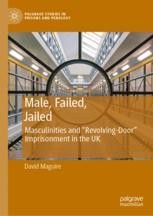 Masculinities and “Revolving-Door” Imprisonment in the UK

The profile of prisoners across many Western countries is strikingly similar – 95% male, predominantly undereducated and underemployed, from the most deprived neighbourhoods. This book reflects on how similarly positioned men configure masculinities against global economic shifts that have seen the decimation of traditional, manual-heavy industry and with it the disruption of long-established relations of labour. Drawing on life history interviews and classical ethnography, the book charts a group of men’s experiences pre, during and post prison. Tracking the development of masculinities from childhood to adulthood, across impoverished streets, ‘failing’ schools and inadequate state ‘care’, the book questions whether this proved better preparation for serving prison time than working in their local, service-dominated, labour markets. It integrates theories of crime, geography, economics and masculinity to take into account structural and global economic shifts as well as individual long-term perspectives in order to provide a broad examination on pathways to prison and post prison.

David Maguire is Director for the Prison Reform Trust’s Building Futures Programme, a five-year programme for those that have served 10 or more years in prison. As a researcher at Oxford University and University College London, UK, he has extensive experience leading on prison-based projects, collecting data on the vulnerabilities facing those in prison and widely disseminating these findings to impact change.

“Maguire’s development of the concept of “prison masculinities” is highly valuable … . This important study has shone a light on the experiences of an extremely marginalized group of men in a hidden social context, who have shared highly personal and honest observations on their lives. Maguire has achieved this in a sensitive and reflexive way, openly weighing his own positionality as the researcher throughout, influenced by feminist-inspired critical masculinities approaches.” (Stephen R. Burrell, Men and Masculinities, August 26, 2021)

“Maguire contributes to our knowledge of how masculinities, informed by class and protest masculinities, affect criminal involvement. … Maguire’s Male, Failed and Jailed makes an important contribution to our understanding of the connection between environment, performance masculinities, and identity for men.” (L George Sheppard and Rosemary Ricciardelli, Punishment & Society, July 26, 2021)

“Maguire focuses on the role masculinity plays in the lives of 30 men he interviewed in prison in Hull. … Charting these men’s journeys, Maguire skilfully weaves together the empirical data with his analysis and the literature to show the way masculinities are formed and entrenched, … culminating for some in the prison’s Vulnerable Prisoner Unit (VPU). … Maguire’s appeal for greater attention to masculinity and how it affects all those in prison and beyond is insightful.” (Marguerite Schinkel, The British Journal of Criminology, July 1, 2021)

“In his classic study Learning to Labour, Paul Willis showed us how the pressures of masculinity duped working class English boys into self-entrapment in lives of manual labour. Forty years later in post-industrial north of England, Maguire finds that the same demands of masculinity are now preparing working class males not for the factory floor, but for prison. Maguire’s ground-breaking new study of the reproduction of a criminal caste has the potential to be as transformative as Willis’s writing was 45 years ago.“

“Maguire’s book is a triumph on so many levels. The culmination of a long personal journey, it offers anyone concerned about prisons, social justice and men’s lives a rich and provocative new resource. Academic books are often the result of impressive scholarship and searching intelligence. This is all of that, but I also defy anyone not to be moved by Maguire’s account of young men looping in and out of jail. Hurting inside and out, they have rarely been so well drawn or their predicaments so acutely analysed.”

“Complicating new arguments that young men no longer ‘learn to labour’, but instead ‘learn to serve’, this book charts the ways that places and spaces come to bear on constructions and performances of masculinity and result in young men ‘learning to serve’ at her Majesty’s pleasure. Sensitive and sophisticated, the sociological insights developed by David Maguire are in keeping with the traditions of the famous Teesside studies, upon which this book excellently builds.”