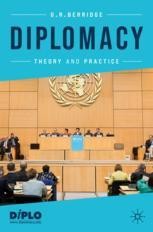 This fully revised and expanded edition of Diplomacy, written by an internationally respected researcher and teacher of the subject, is richly illustrated with examples from the worlds of health and commerce as well as high politics. The instances included are mostly contemporary, but considerable historical background to the diplomatic methods themselves is always provided. Among other features, new to this edition is a list of topics for seminar discussion or essays, as well as annotated further reading at the end of each chapter.

Following a chapter on the foreign ministry, Part I of this book deals with the art of negotiation (prenegotiations, around-the-table negotiations, diplomatic momentum, packaging agreements, and following up); Part II covers conventional modes of diplomacy (embassies, telecommunications, consulates, secret intelligence by ‘legals’, conferences, summits, and public diplomacy); and Part III examines diplomacy in hostile circumstances (embassy substitutes such as representative offices and interests sections, special missions, and mediation). Students and educators of diplomacy will find much of value in the latest edition of this highly regarded and much-cited textbook.

G. R. Berridge is Emeritus Professor of International Politics at the University of Leicester, UK, sometime Occasional Teacher at the London School of Economics & Political Science, and a Senior Fellow of DiploFoundation. He was Associate Editor for diplomatists of the Oxford Dictionary of National Biography.

“This is a highly welcome update for the best general introduction to the theory and practice of diplomacy. It is clear enough to be recommended to undergraduate students, yet sufficiently thoughtful and incisive to be read with profit by practitioners and experts.” (John W. Young, Emeritus Professor of International History, University of Nottingham, UK)

"Diplomacy: Theory and Practice is a tour de force in diplomacy scholarship. Geoff Berridge has not only written the definitive text in diplomatic studies, he has done so in a lucid, accessible, and engaging way that sets the gold standard for how books should be written. Weaving together historical cases with contemporary examples, Berridge has given us essential reading for any student of international politics." (Marcus Holmes, Associate Professor of Government, College of William & Mary, USA)