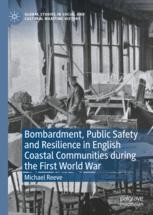 This book makes the case for a unique coastal-urban experience of war on the home front during the First World War, focusing on case studies from the north-east of England. The use of case studies from this region problematises an often assumed national or generalised experience of civilian life during the war, by shifting the frame of analysis away from the metropolis. This book begins with chapters related to wartime resilience, including analysis of pre-war fear of invasion and bombardment, and government policy on public safety. It then moves on to a discussion of power relations and the local implementation of policy related to bombardment, including policing. Finally, the book explores the ‘coastal-urban’ environment, focusing on depictions of war damage in popular culture, and the wartime and post-war commemoration of civilian bombardment. This work provides a multi-faceted perspective on civilian resilience, while responding to a recent call for new histories of the ‘coastal zone’.

Michael Reeve is a Lecturer in History at Bishop Grosseteste University, Lincoln, UK. He received his PhD in History from the University of Hull, UK, in 2019, funded by the Arts and Humanities Research Council.

“This book is a fascinating novel project researching the effects of bombardment during the First World War on four north-east coastal towns. It makes a much-needed contribution to the history of police work, a developing area of historical research. It shows preparations prior to the war with the threat of invasion, and the fear and anxiety of the population when bombardment occurred. The book outlines the destruction to the buildings and infrastructure and provides the context of local and national events with the advice and instructions given to the local population. By showing the role of Special Constables, it provides a real insight into the Home Front at this critical time in British history.”

“The First World War is both distant and close – our knowledge intimately familiar yet somehow incomplete. Nowhere is this truer than for the unique coastal-urban experience of that conflict explored by Michael Reeve in this book. Focusing on morale, endurance, and public safety, we see and understand new aspects of Britain’s coastal zone through German naval and aerial bombardment and destruction in Hull, Hartlepool, West Hartlepool, and Whitby. Local popular culture confronted and framed the tragic aftermaths, with nearby Scarborough’s 1915 ‘Bombardment Museum’ housing relics and souvenirs of the attacks, and Hartlepool’s ‘Bombardment Thank-offering Days’ fundraising for hospitalized victims of the December 1914 attack. Shifting between the detail of objects and the grander narratives of context, the author makes a powerful and convincing case for looking afresh at how conflict creates as well as destroys by reconfiguring the people and places of our historic coastline.”