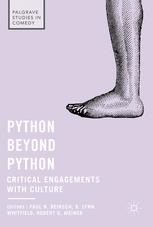 This collection of original, interdisciplinary essays addresses the work of Monty Python members beyond the comedy show, films, and live performances. These men are prolific creators in a variety of artistic realms beyond the confines of the comedy troupe. Their work as individuals, before and after coming together as Monty Python, demonstrates a restless curiosity about culture that embraces absurdity but seldom becomes cynical. Python members collectively and individually create unique approaches to theatre, film, video games, comic books, business training videos and more. Python Beyond Python increases our understanding of this often neglected work and the meanings of Monty Python.

“Python fans who want more than 45 TV shows, five films, and stacks of DVDs, CDs, books and downloads are in for a treat. Python Beyond Python delves into areas that are often overlooked by Python fans, showing the vast reach of the legendary group. If you enjoy uninformative, dull, and non-entertaining books about Monty Python, avoid this one at all costs!” (Kim “Howard” Johnson, Author of Monty Python: From the Inside Out (2014), Monty Python's Tunisian Holiday: My Life with Brian (2008), The First 20 Years of Monty Python (1989) and Superman: True Brit (with John Cleese, 2004)

“Python Beyond Python ventures into little known facets of Python creativity to indicate, as editor Paul N. Reinsch affirms, that the Pythons are not merely the sum total of their parts but “something else.” Without diminishing the fame and ongoing influence of the canonical Python texts, the authors expand and differentiate the range of contributions each Python makes in cultural forms beyond cinema and TV, including Broadway theatre, training videos, travel, autobiography and history writing.” (Marcia Landy, Distinguished Professor of English/Film Studies, University of Pittsburgh, USA. Author of Monty Python’s Flying Circus (2005) and Stardom, Italian Style: Screen Performance and Personality in Italian Cinema, 2008)

“In Python Beyond Python we have, finally and at long last, the first steps toward a more careful, more thoughtful, use of “Pythonesque.” It’s a terrific book, really, guaranteed to delight fans of comedy, well-versed in Python or not. By the way, I imagine the other blurbers are also at it, telling you just how swell this book is. They’re right, but, mind you, I’ve actually read a good bit of it.” (Gary Hardcastle, Associate Professor of Philosophy, Bloomsburg University , USA. Co-editor of Monty Python and Philosophy (2006) and Bullshit and Philosophy, 2006)