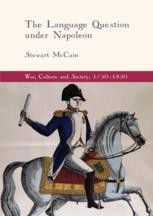 The Language Question under Napoleon

This book offers a new perspective on the cultural politics of the Napoleonic Empire by exploring the issue of language within four pivotal institutions - the school, the army, the courtroom and the church. Based on wide-ranging research in archival and published sources, Stewart McCain demonstrates that the Napoleonic State was in reality fractured by disagreements over how best to govern a population characterized by enormous linguistic diversity. Napoleonic officials were not simply cultural imperialists; many acted as culture-brokers, emphasizing their familiarity with the local language to secure employment with the state, and pointing to linguistic and cultural particularism to justify departures from which what others might have considered desirable practice by the regime. This book will be of interest to scholars of the Napoleonic Empire, and of European state-building and nationalisms.

Stewart McCain is Programme Director in History at St Mary’s University, Twickenham, UK, and has previously taught European History at the Universities of Winchester, Aston and Oxford. Grants from the Arts and Humanities Research Council and the Royal Historical Society have supported his research, which has previously appeared in French History.

“Stewart McCain’s richly researched and thought-provoking new book is the latest contribution to the scholarly conversation on the Revolutionary invention of French linguistic nationalism. … The Language Question under Napoleon will be required reading for scholars interested in the intersection between language, nationalism, and state formation in France.” (Paul Cohen, H-France Review, Vol. 19 (217), November, 2019)
“Drawing on impressively wide-ranging research in national and provincial archives, this book painstakingly reconstructs the contours of Napoleonic language policy as it evolved and was applied throughout the First Empire. … McCain’s study presents an admirably nuanced analysis, not just of the politics of language in Napoleonic France, but also of cultural imperialism in both theory and practice.” (Joseph Clarke, French History, Vol. 32 (03), September, 2018)
“Napoleon’s fame rests in part on perfecting a centralized administrative machine that obsessively imposed uniformity. This, at least, is the image. Stewart McCain, in this brilliant study of language policies, rediscovers a dynamic more complicated than a simple top-down imposition by the state. Non-governmental actors, including notables, scholars, professionals and priests, emerge in this book as vital players in the story of the propagation of the French language, both within and beyond France.” (Michael Rowe, King's College London, UK)

“McCain’s book fills a significant gap in our knowledge of the spread of the French language, and he casts his net very widely across the Napoleonic Empire to do so. Historians of the Empire and its workings, as well as socio-historical linguists, will be in his debt.” (Martyn Lyons, University of New South Wales, Australia)