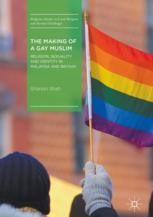 The Making of a Gay Muslim

Religion, Sexuality and Identity in Malaysia and Britain

This book highlights the lived experiences of gay Muslims in Malaysia, where Islam is the majority and official religion, and in Britain, where Muslims form a religious minority. By exploring how they negotiate their religious and sexual identities, Shah challenges the notion that Islam is inherently homophobic and that there is an unbridgeable divide between ‘Islam’ and the ‘West’. Shah also gained access to gay Muslim networks and individuals for his in-depth research in both countries, and the book investigates the different ways that they respond to everyday anti-homosexual or anti-Muslim sentiments. Amid the many challenges they confront, the gay Muslims whom Shah encountered find innovative and meaningful ways to integrate Islam and gay identity into their lives.

The Making of a Gay Muslim will appeal to students and scholars with an interest in contemporary Islam, religion, gender and sexuality.
Show all
About the authors

Shanon Shah is an academic based in London, UK. He lectures in the sociology and anthropology of religion and researches into contemporary Islam and Christianity in Malaysia and Britain.

“The key strength of this book is its comparative approach that demonstrates the constructive nature of faith and sexuality through different historical, political, social and demographical contexts, within which gay Muslims make sense of, receive/reject, negotiate, express/suppress their faiths and sexualities. … this book certainly serves as a great reference to interested scholars and gay Muslim individuals in understanding these two seemingly ‘incommensurable’ identities in Europe and Southeast Asia.” (Chua Hang-Kuen, Journal of Malaysian Studies, Vol. 38 (1), 2020)
“The Making of a Gay Muslim, is not just important in terms of expanding our knowledge about the complex interfaces between sexual orientations and religious affiliations. … . Thick description has been applied throughout the book, as the author records in detail the design process of the project and how the data were collected, interpreted and eventually formulated into concrete findings and conclusions. At every stage, the descriptive parts are interlaced with critical analysis and (self-)reflection.” (Carool Kersten, Religion, State & Society, Vol. 47 (1), 2019)

“Shah’s prose is vivid and energetic, and the reader feels drawn to the text and the writer. Stories and observations are interspersed with references to academia, activism, and religious writing, adding weight to the powerful participant views. The writing style is also supported by an honest and transparent approach. … The Making of a Gay Muslim is an excellent and engaging work which deserves to be widely read.” (Alexander Toft, Reading Religion, readingreligion.org, September, 2018)


“This is a pioneering and timely study of how ‘gay Muslim’ identities are shaped in Malaysia and Britain. But this highly readable, cutting-edge ethnography of lived experiences also tackles broader questions about the intertwining of Islam with sexual and ethnic identities, with stigma and persecution, and with legal regulation. It is essential reading for anyone interested in the changing faces of Islam and the controversies in which it is embroiled.” (James A. Beckford, University of Warwick, UK)

“This meticulously researched book offers important and fascinating insights into the lives of gay Muslims in Malaysia and Britain. Framed by an engaging storytelling approach, the book offers in-depth and thought-provoking narratives that draw the reader into the various aspects of gay Muslims’ lives, as they navigate the highly sensitive political, religious, and cultural terrain, and negotiate their intersecting identities. This book balances intellectual rigour and an accessible writing style. It is undoubtedly a timely and important contribution to current debate on the intersection between sexuality, gender, ethnicity, and religion in a globalised world.” (Andrew Kam-Tuck Yip, University of Nottingham, UK)

“This is a rich ethnography of a taboo subject, theoretically sophisticated, and full of insightful observations and analysis of what it means to be a gay Muslim in two different part of the world. In The Making of a Gay Muslim, Shah takes the reader into a relatively unknown “life-world”, and tells how two seemingly irreconcilable identities can come together as part of the process of shaping religious change.” (Ziba Mir-Hosseini, SOAS University of London, UK)

“The Making of a Gay Muslim is a rare glimpse into the life of gay and lesbian Muslims in Britain and Malaysia. With exemplary ethnographic fieldwork, author Shanon Shah interviews gay Muslims to reveal their hopes, dreams, aspirations and everyday struggles.  This book presents their stories with warmth, compassion and humour. It is a must read for those interested in contemporary Islam, and offers touching insights into sociology and sexuality, identity and politics, media and human rights.” (Scott Siraj al-Haqq Kugle, Emory University, USA)

“The Making of a Gay Muslim provides an engaging, sophisticated, and exceedingly timely account of the entanglement of religion, sexuality, and identity in Malaysia and Britain. Clearly written, well argued, and admirably reflexive, Shanon Shah offers incisive comparative perspectives on the formation of sexual and gender identities among Muslims in both a Muslim-majority context and a Western nation where Muslims are at once a minority and a deeply suspect “Other”. Along the way Shah examines the ethical and other dilemmas of studying Muslims’ engagement with gender and sexual identities conventionally seen as beyond the pale. The brave and empathetic book will be welcomed by scholars in a number of different academic disciplines and also has great potential for use in the classroom.” (Michael G. Peletz, Emory University, USA)