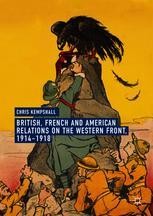 British, French and American Relations on the Western Front, 1914–1918

This book provides a thorough examination of the relations between the men in the British, French and American armies on the Western Front of the First World War. The Allied victory in 1918 was built on the backs of British, French, and American soldiers who joined together to fight for a common cause. Using the diaries, records, and letters of these men, Chris Kempshall shows how these soldiers interacted with each other during four years of war. The British army that arrived in France in 1914 became isolated from their French allies and unable to coordinate with them. By 1916, Britain’s professional soldiers were replaced by civilians who learned to love their French ally, who reached out to them in friendship. At the end of the war the introduction of American soldiers caused hope and conflict before perceived British failures brought the alliance to the brink of collapse. Final cooperation between these three nations saw them victorious.

Chris Kempshall is an historian focusing on the First World War and popular representations of warfare. He has taught on war and European history at the Universities of Sussex, Kent, and Goldsmiths College, London. He is the author of The First World War in Computer Games (Palgrave, 2015) and is a member of the Academic Advisory Board for the Imperial War Museum's digital centenary projects.

“Kempshall has mined an impressive array of manuscript sources to illustrate the attitudes of officers and soldiers at the front line, and the impressions of French and American soldiers towards their British counterparts are particularly interesting for scholars of the BEF. The work explores the prejudices of French and British troops towards one another throughout the war, with a particular emphasis on the softening of attitudes during the Battle of the Somme… this is an interesting book on an important subject. It is thoroughly researched, ambitious in scope and provides an excellent base for scholars who wish to explore the complexities of inter-Allied relations.” (Spencer Jones, Journal for Army Historical Research, Vol. 97 (2019))
“Chris Kempshall’s work is an excellent example of blending the military history of the war with social and cultural history. He shows that soldiers never lived in national silos on the Western Front, but were well aware of the presence of their allies, and found that they could inspire curiosity, admiration, jealousy, or even contempt. His work is a brilliant insight into the sheer complexity of soldiers’ lives on the Western Front.” (Mark Connelly, University of Kent, UK)

“Froggies, Sammies, and Tommies fought together on the Western Front against a common enemy and, occasionally, against each other. Using vivid examples from postal control records and private diaries and letters, Chris Kempshall illuminates a rarely seen aspect of the First World War fighting: French, American and British perceptions of their allies. He charts initial reactions of the rank-and-file to a foreign and mostly unknown “other”, and then their changing attitudes over four years of war.” (Elizabeth Greenhalgh, University of New South Wales, Australia)

“This is a fascinating study which sheds new light on the friendships and frictions between “allied” soldiers on the Western Front. Exhaustive research in archives on both sides of the Atlantic has enabled Chris Kempshall to recover an absorbing social history of inter-allied relations, which goes well beyond traditional narratives centred around the actions and agency of political elites. An invaluable addition to the literature examining the armies that fought and won the Great War.” (Sam Edwards, Manchester Metropolitan University, UK)