Non-representational theory emerged out of British Social and Cultural Geography at the University of Bristol in the 1990s, and the work of Nigel Thrift and his PhD students. For Thrift, the problem with representation was its static orientation towards a world that is already there. In non-representational theory, the world is not static—it takes place. Life is emergent, unfolding in a multitude of ways out of movement, intensities, and encounters. According to Thrift (2008), the world is ‘jam-packed with entities’ that are continually coming into, and out of, relation with one another. Life is ‘messy’ as there is always more going on than what we can apprehend. Non-representational theory affirms life’s messiness by embracing it—by including it and foregrounding it—rather than leaving it to one side.

Thrift (2008) describes non-representational theory as the geography of what happens, arguing that that all life is based on and in movement. The emphasis on movement is important, because what representation does is capture movement, thereby halting it. This is what Dewsbury (2010) refers to the inevitability of failure in non-representational research. In forming an opinion, we bring closure to an idea. We are compelled by institutions to write our observations and insights down on paper. In so doing, we must make some capture of the ‘eventfulness’ of practice. Even time-based creative methods, such as video and soundscape face similar problems. Artists and geographers working with non-representational theory have developed approaches to durational photography and video montage, or field recording and audio playback, to extend research accounts just a little bit further than representation normally allows.

In taking movement as its leitmotif, non-representational theory enrols the concept of joint action. When something moves, it moves in concert and in relation. As Manning (2013) puts it, we are always more than one. In this way, non-representational theory considers human subjects as being of a wider ecology of things. The relevance of joint action for art making is that, as an artist, I am not simply painting, dancing, stitching, or performing. I am not just the causal agent, and the artwork or the performance is not merely the effect of my agency. If I am a dancer, I move in relation to other bodies but I also move in relation to the dance floor. If I paint or draw I move in relation to the materials—the smoothness of the paint, the quality of the light, the thickness of the brushes, the feeling of the canvas or the paper pushing back at me. If I stitch or knit, I work with the textures of fibre and the way it yields and flexes in my hands. As a photographer or a filmmaker, it is not so much that I create the scene but the scene creates itself through the joint actions of others. Joint action is, in fact, so central to art making that the artist may sometimes feel that they have no personal agency at all (Hawkins, 2011). The artwork emerges out of the relation between artist and materials in such a way that that it cannot be foreshadowed or explained. Bolt (2010) calls this ‘methexis’. Stephen King, the popular author, describes something similar in the way his stories write themselves (King 2010).

Non-representational theory has great affinity with new materialisms, speculative realism and post-phenomenology in that it embraces the concept of material schematism, the agency of things, and a de-centred or distributed self. However, the most celebrated concept in non-representational theory is the notion of affect. Across the social sciences and the humanities, affect is understood in several ways. And yet affect is so difficult to define, partly because it is not a thing, a state, a condition, or a feeling. As Anderson (2014) explains, affect is ‘always-already imbricated’ in all aspects of life. For Guattari (1995) affect is life, or what it means to be alive. However, one of the easier ways to think about affect is as a capacity. For Deleuze and Guattari (1987; after Spinoza) affect is the capacity to affect and be affected.

But perhaps one of the greatest contributions of non-representational theory to creative arts practice is the way that it distinguishes the intensive qualities of spaces (topology) from the characteristics of places (topography). Topology is an understanding of space as constituted by social relationships, whereas topography refers to the physical features of an area. To illustrate the difference, McCormack (2008) refers to the football pitch. The football pitch is a place you can draw a boundary around; you can find it on a map and travel to that place and identify it as a pitch. But that football pitch becomes a space only when a game takes place on it. It is through practice and performance that space is transmuted into context. Places become spaces through acts of doing, performing, and creating. Spaces are lived.

Candice Boyd is Honorary Senior Fellow in the School of Geography, University of Melbourne. She  is the author of Non-Representational Geographies of Therapeutic Art Making and is currently co-editing a collection with Christian Edwardes, Arts University Bournemouth, on Non-Representational Theory and the Creative Arts, forthcoming with Palgrave.

Bolt, B. (2010). Art beyond representation: the performative power of the image. London: I.B. Tauris. 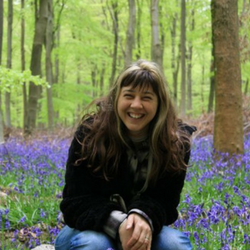