Goddard on Why Cross-translatability Matters

In this article Cliff Goddard, editor of Minimal English for a Global World, discusses the importance of cross-translatability

As a linguist specializing in how meanings are packaged and expressed differently in languages, it’s always bothered me that many social science colleagues underestimate the challenges posed by language differences. With English fast becoming a global lingua franca, it may be easier than ever to do so.

Many people seem to think that the “problem of translation” can be overcome by the standard practice of translation and back-translation. This refers to the procedure whereby a translated document, such as a research survey, is checked by being independently translated back into the original language. Unfortunately, back-translation does not guarantee sameness of meaning – merely that the terms are the nearest single-word equivalents. According to back-translation, Danish lykkelig and Chinese xìngfú correspond with English happy, and these are the Danish and Chinese terms used in the Global Happiness Survey. Careful linguistic studies, however, show significant meaning differences between the three terms. A similar point applies to international instruments such as the McGill Pain Questionnaire and the American Psychiatric Association’s DSM-5 manual. They are full of English-specific words for which only approximate “semi-translations” are available.

What to do? If words and meanings simply refuse to match up across languages, we would seem to face an insurmountable obstacle  – but a 40-year program of cross-linguistic research, led by Anna Wierzbicka and me, suggests a way forward. The crucial fact is that not all word meanings are equally “bound” to individual languages. Evidence indicates that words which are very simple in their meanings, such as ‘I’, ‘people’, ‘something’, ‘good’, ‘want’, ‘do’ and ‘say’, and about 60 others, have exact equivalents across all or most languages. Further, it appears that a similar number of more complex meanings, such as ‘men’, ‘women’ and ‘children’, ‘mouth’ and ‘hand’, ‘water’ and ‘fire’, ‘sky’ and ‘ground’, are also present in all, or almost all, languages. Together, these “universal words” can be a kind of conceptual lingua franca.

Provided we have the wit and the will to re-phrase our questions and ideas into combinations of these simpler, cross-translatable elements, they can be rendered across languages without distortion. For example, rather than asking how often people feel ‘happy’ or ‘satisfied’, we can ask how often they ‘feel something good’ because of thinking something like ‘some good things happened to me’ and (possibly) ‘I don’t want anything else now’. Using simpler wording not only makes surveys, instruments and guidelines cross-translatable, it also makes them clearer and more intelligible to people without a high level of education.

The implications range far beyond social science. I’ve just edited a new volume, Minimal English for a Global World, which showcases collaborations between meaning-focused linguists and experts in human rights, health communication, science education, and international relations. Minimal English is a highly “reduced” version of English, designed to be as simple and cross-translatable as possible.

The key idea is summed up in the book’s subtitle Improved Communication Using Fewer Words. The core vocabulary is a mere 300 or so words: the universal words mentioned earlier, plus a selection which are widely-known around today’s globalised world, such as ‘money’, ‘book’, ‘doctor’, ‘school’, ‘plastic’ and ‘country’. Minimal English can help communities, governments and agencies communicate their messages about health, development, and public policy more effectively and efficiently.

Minimal English may call to mind “Basic English” or Wikipedia Simple English, but in reality it is very different. The reason is that these other systems were not devised with cross-translatability in mind at all. Basic English includes untranslatables such as ‘authority’, ‘experience’, ‘suggestion’, ‘structure’, ‘responsible’, ‘private’, and ‘violent’.

These examples mostly come from high-register English, so it’s important to add that many “plain” English words also lack exact equivalents in many languages; words like ‘right’ and ‘wrong’, ‘fair’ and ‘rude’, ‘sex’ and ‘love’. People’s impressions or intuitions are unreliable when it comes to judging which meanings are “plain” and likely to be cross-translatable. Hence the value of informed evidence-based advice from linguists with deep experience in the study of how meaning is packaged and expressed in different languages.

Returning to the social sciences, I would like to make two final points. The first is that Anglophone scholars often frame their research questions and interpret their results in highly English-specific terms, as for example, when evolutionary anthropologists puzzle over the origins of “altruism” or “cooperation”, unaware or unconcerned that these English constructs lack equivalents in many languages, including many European languages. This hardly seems optimal. Why should scientific results be locked into a single language?

The second point is that “translation problems” (as they are often seen) should not, and need not, be seen only as problems. On the contrary, differences in word meanings, especially in words that are prominent in discourse and culture, may be prompts or clues to important differences in values and ways of thinking.

In both respects, what we need is closer cooperation and collaboration between meaning-focused linguists and others in the social sciences and humanities.

Wierzbicka, A. 2014. Imprisoned in English: The hazards of English as a default language. New York: OUP.

Cliff Goddard is Professor of Linguistics at Griffith University, Australia, and a Fellow of the Australian Academy of the Humanities. His research interests lie at the intersection of language, meaning and culture. He has published widely in descriptive and theoretical semantics, language description and typology, ethnopragmatics and intercultural communication. 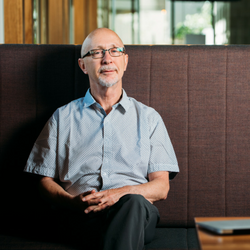