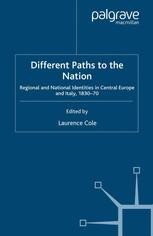 Different Paths to the Nation

Regional and National Identities in Central Europe and Italy, 1830-70

The essays in this volume analyse issues of national and regional identity during a key phase of nation-state formation in mid-nineteenth century Europe. By asking how contemporaries articulated regional and national identities, the book offers a fresh prospective on the process of nationalization in modern German, Austrian and Italian histories.

'This is an extremely valuable and important contribution to the ongoing debate on nationalism and nation-building in Europe... The case studies..exemplify the advantages of a comparative historical approach, as they pose central questions about the complexity, fluidity and gradualness of the processes and pressures on pre-existing local loyalties, and illustrate and explain their crystallization in the face of the hardening lines of national identification in the decades following the revolutions of 1848-49.' - Professor Stuart Woolf, editor of Nationalism in Europe: From 1815 to the Present

'This book offers a fascinating insight into an area which one could describe as a European laboratory for the changes taking place in national and regional identities. Watching how these experiments unfolded is revealing for historians as well as for contemporary observers of the new Europe being built at the current time.' - Professor Dieter Langewiesche, University of Tübingen

'A very valuable contribution to the recent efforts to see nation and nation-state formation as contingent and constructed processes. The various contributions to this book are able to explore the complex ways in which national identity was constructed and promoted as well as given political expression' - John Breuilly, London School of Economics and Political Science, UK

'The essays...overall...bring forther interesting insights and pose questions that provoke further thought on the nature and development of nationalism in nineteenth-century Europe.' - Jonathan Sperber, H-German (H-Net)

'Historians of central European nationalism in the nineteenth and twentieth century owe Laurence Cole a debt of gratitude for making this fine collection of essays available to an English-speaking audience.' Pieter M. Judson, German History