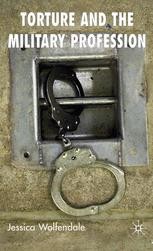 Torture and the Military Profession

Wolfendale argues that the prevalence of military torture is linked to military training methods that cultivate the psychological dispositions connected to crimes of obedience. While these methods are used, the military has no credible claim to professional status.

JESSICA WOLFENDALE is a Research Fellow at the Centre for Applied Philosophy and Public Ethics at the University of Melbourne, Australia. She has published on military ethics, the ethics of torture, and moral philosophy.

'A timely and thorough investigation of the gap between norm and behaviour in relation to torture: the way military training affects soldiers' deliberation and choice, and undermines the military's claim to be a profession. Wolfendale's conclusions are disturbing. Highly recommended reading for soldier and civilian, scholar and general reader alike.' - Igor Primoratz, Centre for Applied Philosophy and Public Ethics, University of Melbourne, Australia

'Jessica Wolfendale's book is focused on the tension between the need to teach soldiers to obey orders both ordinarily and in extreme situations and the need to teach them the restraints of law and morality and the reflectiveness necessary to make hard decisions in frightening circumstances. She wants to resolve the tension in favor of the second need, though she acknowledges the importance of the first to the effectiveness of the army. Her argument that military training as it is now done leads to unreflective obedience, even to the use of torture, is carefully constructed and elegantly made. It deserves our close attention.' - Michael Walzer, Institute for Advanced Study, Princeton, New Jersey, USA

'Far from being one more vague condemnation of torture in the abstract, this deeply troubling book argues that military personnel who become torturers are not deviants or sadists, but are obedient, disciplined, and loyal combatants. Wolfendale maintains that modern military training aims at undermining combatants' moral agency and makes it virtually impossible for them truly to embody the military virtues. Confronted on their own favorite ground of the ethics of virtue, defenders of military morality owe Wolfendale a serious answer. This book pulls no punches and raises profound issues about the extent to which the 'war on terrorism' can avoid crimes of obedience like torture supposedly permitted by extreme circumstances.' - Henry Shue, author of 'Torture' [1978] and Professor of International Relations, University of Oxford, UK