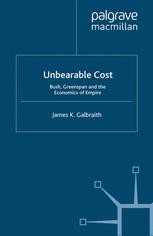 Bush, Greenspan and the Economics of Empire

This work contains James K. Galbraith's most influential recent writings on current affairs along with new commentary, and explores both the descent to disaster in Iraq and the ongoing transformation of the American economy under the steerage of Alan Greenspan.

JAMES K. GALBRAITH holds the Lloyd M. Bentsen Jr. Chair in Government/Business Relations at the Lyndon B. Johnson School of Public Affairs, University of Texas at Austin, USA, and a Professorship in the Department of Government. He is Senior Scholar with the Levy Economics Institute and Chair of the Board of Economists for Peace and Security, a global network of professional economists. He served as Executive Director of the Joint Economic Committee of the United States Congress in the early 1980s.

'Galbraith for the Twenty-first century! Prescient, lucid, elegant. Where others are lost groping in the shadows, James K. Galbraith sees the big picture. His writing is like a torch that guides us through the cave of the present into the light.' - Sidney Blumenthal, formerly Senior Advisor to President Clinton and author of The Clinton Wars

'The reason Jamie Galbraith is such an important writer is because he asks the right questions. You would be amazed at the number of people who pass for pundits or even sages who can't hit the backboard with a question, much less hit the net. That Galbraith knows the answers too strikes me less

impressive. He is after all, an economist and a political scientist and an

academic; he's supposed to know these things. He even did time in the

bowels of congress and so knows how it actually works. Galbraith's writing

is crisp, funny, and incisive. Krugman, move over, Galbraith is here.' -

Molly Ivins is a syndicated columnist, co-author of Bushwhacked: Life in

George Bush's America, and a fellow of the American Academy of Arts and