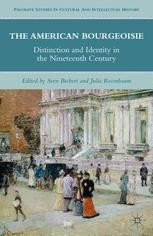 Distinction and Identity in the Nineteenth Century

This volume engages a fundamental disciplinary question about this period in American history: how did the bourgeoisie consolidate their power and fashion themselves not simply as economic leaders but as cultural innovators and arbiters? It also explains how culture helped Americans form both a sense of shared identity and a sense of difference.

"The American Bourgeoisie, with its richly nuanced case studies - ranging from food to geneology; education to music - gives a new cultural dimension to our understanding of class formation in the late nineteenth century. This book tells the story of how social, expressive, and institutional practices transformed raw economic resources into class identities that largely trumped occupational, ethnic, regional, and political loyalties. It reveals class formation to be fluid and contingent upon social, material, and ritual enactments evolving in tandem with shifts in capital. With its distinguished roster of contributors, this volume offers a vital new resource for cultural and social history, material culture, art history, and literary studies." - Angela Miller, Professor of Art History and Archaeology, Washington University

"After three decades of intensive research on the European bourgeoisie, here comes the much-needed American counterpart. As in the European case, culture has gained center stage as a field of social demarcation and identification." - Ute Frevert, Director, Max Planck Institute for Human Development

"As these lively and perceptive essays demonstrate, nineteenth-century Americans of wealth devoted enormous energy to developing manners and building cultural institutions that distinguished them from common people in an ostensibly democratic society. How wealthy men and women dined, traveled, displayed art, decorated their houses, identified their ancestors, and established museums, concert halls, and alumni associations all spoke to an aspiration to refine capital and establish the legitimacy of the power associated with it. These essays bring the process of class formation alive with satisfying attention to its material and cultural dimensions." - Elizabeth Blackmar, Professor of History, Columbia University

"This is a wide-ranging collection of essays on aspects of elite American culture in the nineteenth century. One of its distinguishing features is the genuinely interdisciplinary character of its contributors. The cumulative picture they draw of the ways in which these economic elites drew closer together as the century wore on, the institutions of exclusion and self-definition they constructed, and the lasting patronage of the high arts on which they fashioned a part of their claims to worth and status is broad and coherent. For those interested in the origins of the cultural institutions that this group was so prolific in founding, in particular, this is a valuable collection." - Daniel T. Rodgers, Henry Charles Lea Professor of History, Princeton University