Theory in the World
Free Preview 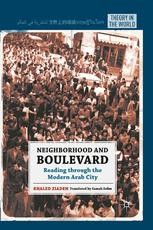 Reading through the Modern Arab City

Combines the styles of memoir, history, anthropology, and theory to develop an innovative reflection on the materiality of culture. Through its style and content, the text challenges the Orientalist bifurcation between tradition and modernity in the Arab world, revealing instead tradition's own dynamism and its coexistence alongside modernity.

KHALED ZIADEH Ambassador of Lebanon in Cairo and Permanent Delegate to the Arab League.

SAMAH SELIM is Professor of Modern Arabic Literature in the Department of African, Middle Eastern and South Asian Languages and Literatures at Rutgers University

"It is hard to exaggerate the renewed significance of Ziadeh's Neighborhood and Boulevard in its English version at a time when the city of Cairo and its Tahrir Square have entered into a renewed pact with Arab modernity. When this book was written in the mid-1990s, the Arab world was still very much in the grips of the postcolonial traumas of modern nation-building, with the years 1948 and 1967 indelibly carved as markers of catastrophe and defeat on the bodies and souls of its urbanity. Now, those traumas have yielded to a euphoric Arab Spring. The delightful narrative experiments of Ziadeh in this book yields further credence to the central function of literary imagination, not just in the sense of urbanity that he so superbly depicts in this seminal book, but of its prophetic anticipation of what is unfolding right in front of our eyes from Morocco to Syria, from Jordan to Yemen. This is a work of densely inventive literary imagination, framing a groundbreaking spatial register for alternative sites of modernity." - Hamid Dabashi, Columbia University

"At once palimpsest, mosaic, collage, and meander, Neighborhood and Boulevard presents a profoundly poignant depiction. Khaled Ziadeh urges for the restoration of the historically built community that has been written and re-written into the Lebanese city s topography and demography, despite decades of Ottoman imperialism, European colonialism, Arab nationalism, and, more recently, sectarianism. Not unlike Benjamin s Parisian flaneur, the narrator of these sensitively translated essays recollects the pathways trod and the peoples displaced in the even now still populous Arab/Mediterranean urban space." - Barbara Harlow, Louann and Larry Temple Centennial Professor of English, University of Texas at Austin

"Neighborhood and Boulevard seems at first a memoir about growing up in a Mediterranean city. However, you realize slowly it's not about the observer; it's about the setting. Through human eyes we see the city and its unsettling, non-human changes." - Michael Beard, co-editor, Middle Eastern Literatures

"Eloquently written and sensitively translated, Neighborhood and Boulevard provides general readers and specialists in Middle Eastern studies with access to Ziadeh s intellectually nuanced renderings of an Arab past that is crucial to understanding the present." - Salah D. Hassan, Professor of English, Michigan State University