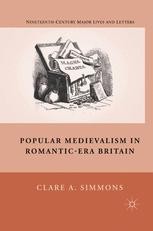 Through the consideration of canonical authors such as Blake, Scott, and Wordsworth and of lesser-studied works such as radical press writings and popular drama, this study explores the imaginative appeal of the social structures and literary forms of the Middle Ages, and how they raised awareness of Britain's tradition of freedom.

CLARE A. SIMMONS Professor in the Department of English at Ohio State University, USA. She is the author of Eyes Across the Channel: French Revolutions, Party History and British Writing 1830-1882, among others.

"Popular Medievalism in the Romantic-Era Britain brings an important perspective to bear on the Romantic rage for the past. Simmons notes that "medievalism," being a Victorian coinage, is usually discussed in the Victorian context and is usually conceived as in Ruskin, where the Romantic "zeitgeisty" notion of the three great "ages" of history takes a cultural and ethical turn to produce "Classicalism, Medievalism, and Modernism" ( 2). By going back to before Victorian medievalism and its obsession with duty, Simmons recovers other more "popular" ways of conceiving medieval period." - The Wordsworth Circle

"Popular Medievalism in the Romantic-Era Britain's wide-ranging and meticulous analyses insist on the textuality not just of print sources but of structures, installations, and events. Simmons' uncovering of the connections among such disparate texts makes this a fascinating study. Her demonstration of the reach of populist discourse in the era deliberate and otherwise extends the work on Romantic radicalism and responses to it of Marcus Wood and Kevin Gilmartin.' - Kristin Samuelian

"By investigating the popular medievalism of the Romantic era, Simmons adds an essential and hitherto neglected facet to the continually evolving picture of the reception of medieval culture in postmedieval times. As an important corrective to the widely investigated medievalist reinventions of Romantic and Victorian elites, her study focuses on expressions of medievalism adopted by or accessible to the less privileged classes of British society. Expertly conversant with the longue durée of English responses to the Middle Ages since the beginnings of early modernity, Simmons demonstrates how the increased literacy and interest in political matters among those in skilled occupations as well as those who performed manual labor led to a popular view of a uniquely English continuity between the nation's present and its medieval past." - Richard Utz, Professor and Chair, Department of English, Western Michigan University