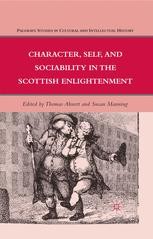 Character, Self, and Sociability in the Scottish Enlightenment

An interdisciplinary examination of the Enlightenment character and its broader significance. Whilst the main focus of the book is the Scottish Enlightenment, contributors also employ a transatlantic scope by considering parallel developments in Europe, and America.

'Although David Hume, Adam Smith, and James Boswell rightfully emerge as the stars of this volume on eighteenth- and early nineteenth-century Scottish notions of character and self, one also encounters painters and preachers, physicians of the nervous system and philosophers of common sense, a learned printer, and other varieties of Enlightenment figures. It adds up to a stimulating read on a fascinating and previously neglected topic.' Richard B. Sher, author of The Enlightenment and the Book

''Character' was a key term in the eighteenth century, operative and meaningful across many forms of writing from the literary to the philosophical, medical, scientific, anthropological, and historical. This collection is the first to approach this distinctively Enlightenment way of understanding of the contextual self in an interdisciplinary manner. Taken together, these essays shed new light on the conceptual field of character, and offer rich and important new insight into its Scottish, European, and American implications.' Karen O'Brien, professor of English Literature, University of Birmingham, UK

'The concept of character is as central in eighteenth-century culture as it is protean in its guises. It is associated with virtue, or with what we might now call integrity. It is associated with reputation, and with the ways in which a person is captured in description or depiction. It is associated with the notion of specific traits, what Shaftesbury calls 'characteristicks.' And it is associated with mask or persona i.e., with guise itself. Ahnert and Manning have assembled essays that bring to bear the necessary multiplicity of perspectives to survey this wide range of meanings. By anchoring the project in Scottish Enlightenment moral theory, they have also provided a sense of coherence to the collection as a whole, nicely explicated in their lucid introduction. All in all, the volume is a valuable resource for students of eighteenth-century culture and historians of ethical discourse.' James Chandler, Barbara E. & Richard J. Franke Professor in the department of English Language & Literature, The University of Chicago