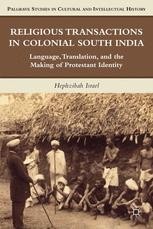 Language, Translation, and the Making of Protestant Identity

Religious Transactions in Colonial South India locates the "making" of Protestant identities in South India within several contesting discourses. It examines evolving attitudes to translation and translation practices in the Tamil literary and sacred landscapes initiated by early missionary translations of the Bible in Tamil. Situating the Tamil Bible firmly within intersecting religious, literary, and social contexts, Hephzibah Israel offers a fresh perspective on the translated Bible as an object of cultural transfer. She focuses on conflicts in three key areas of translation - locating a sacred lexicon, the politics of language registers and "standard versions," and competing generic categories - as discursive sites within which Protestant identities have been articulated by Tamils. By widening the cultural and historical framework of the Tamil Bible, this book is the first to analyze the links connecting language use, translation practices, and caste affiliations in the articulation of Protestant identities in India.

HEPHZIBAH ISRAEL has recently joined the University of Edinburgh, UK, as Lecturer in Translation Studies in the School of Literatures, Languages and Cultures. She previously taught literature in India in the Department of English, Lady Shri Ram College, University of Delhi.

"A nuanced and highly sophisticated treatment of the way in which translation participates in constructing religious identity. Meticulous in its attention to detail and inspiring in its broader vision of the dynamics of dominance and resistance." - Mona Baker, Centre for Translation & Intercultural Studies, The University of Manchester"This is a very exciting book. Issues of contact, dialogue, and appropriation between different languages, religions, and cultures underlie the history of South Asia almost from pre-historical to modern times. Many of them center on questions of translation. Yet contemporary historians often struggle to grasp them, where their own expertise is deficient not only with regard to linguistic skills but, as much, with regard to the many others disciplines involved - philology, linguistics, theology, philosophy, and anthropology. Hephzibah Israel, besides having a bilingual fluency in Tamil and English, shows a sophisticated understanding of many of these disciplines, which enables her to range far and wide in exploring her subject: the encounter between German and Anglican Protestantism and Tamil-speaking congregations in India. This book offers to take us where we should have gone long ago and to put (at least) Tamil India on the map so far as the global encounter with Christianity is concerned." - David Washbrook, Fellow, History, Trinity College, Cambridge"Since the nineteenth century, the Tamil context has been deeply shaped by language politics. This is the first book that broadly explores the influence of Tamil language politics on Protestant identities in South India and the formation of a Christian Tamil. It highlights the importance of the Protestant Bible translations and of their language as crucial identity markers. Anybody who wants to understand the complex fabric of Christian identity in India should read this book. - Michael Bergunder, Professor of History of Religions and Mission Studies, Heidelberg University