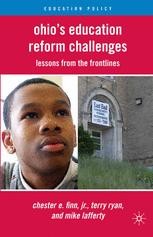 Lessons from the Frontlines

Charter schools have emerged as one of the central policy debates in U.S. education - and the Thomas B. Fordham Institute team has been a key participant in this debate since day one, both nationally and in Ohio. Despite President Obama's call for states to strengthen the charter sector and widen the options it provides to needy youngsters, established interests in education and politics oppose this disruption of the status quo. Ohio has struggled with these issues for more than a decade, struggles in which the authors of this book have played influential - and controversial - roles, including that of an actual authorizer of charter schools. They write from wide experience on the ground as well as extensive research and nationally-respected policy expertise.

Terry Ryan is Vice President for Ohio Programs & Policy at the Thomas B. Fordham Institute.

Michael B. Lafferty is a freelance science and education writer and serves as a writer for the Thomas B. Fordham Institute’s Ohio Education Gadfly newsletter.

"A brutally honest account of charter school reform in Ohio - a fast-paced narrative full of fascinating insights gained from real experience. I wish I could have read this book my first year as Governor." - Bob Taft, Governor of Ohio 1999-2007

"What a terrific story! This book is a real battlefield memoir, one that portrays the political tug-of-war over charters, choice, and accountability in vivid terms. The Fordham team names names - and fesses up to their own foibles as well - providing the kind of insight you can t find in most plain-vanilla volumes on education reform." - Nelson Smith, President & CEO, National Alliance for Public Charter Schools

"In a story taken from today s national headlines, more than a dozen years ago the Dayton Public Schools and the State of Ohio confronted their failing public school system. It s a story of a declining economy, frustrated business leaders, legislative deal-making, visionary educators, entrenched education interests, and thousands of children attending schools that were not preparing them to succeed in life. This is a fascinating and straightforward description of those times, their compromises, successes and failures.The book tells us how the next twelve years turned out for Dayton and for Ohio. The authors provide a compelling history and thoughtful recommendations for the future." - Greg Richmond, President & CEO, National Association of Charter School Authorizers

"This is a terrific book thatdisplays the collision of theory of practice, the demise of Public Education in America as chronicled by Ohio/Dayton but then tells us 18 great ways to address our problems. Kudos to Finn and his team for being candid andthoughtful. If you want to experience the decline of American Education and what to do about it - this is the book for you. Ohio/Dayton are examples of what happened across the nation and this candid look at mistakes made in applying theory in reality is a must read." - David P. Driscoll, Former Commissioner of Education for the Commonwealth of Massachusetts

"An engaging, interesting, and first-hand account of education reform in Dayton and the maverick move by the Fordham Foundation to become a charter school authorizer there.Lessons for Ohio but also for education policymakers and reformers nationally." - Andrew J. Rotherham, Co-Founder and Partner, Bellwether Education

"This book is a must read for anyone interested in public policy in general and educational reform in particular. Finn and his colleagues capture in powerful and compelling ways how reformers not only seek to change schools but are also frequently impacted themselves by the changes they call for in P-12 classrooms." - Thomas J Lasley, II, Dean of the School of Education and Allied Professions, University of Dayton