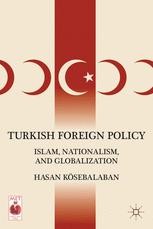 This book explores how Turkey's contested national identity has affected its foreign policysince the late Ottoman era. The book takes a constructivist approach, asserting that identity matters for foreign policy decisions, but it separates itself from statist approaches by bringing identity question into domestic politics.

"Like no other text available today, Kösebalaban's Turkish Foreign Policy deftly explains the interplay between ideology, history, and identity in shaping the global conduct of this rising power. A most reliable guide to navigating the complex terrain of Turkey's emerging post-Kemalist foreign policy." - Peter Mandaville, George Mason University, author of Global Political Islam

"By bringing in ideology and identity, Kösebalaban introduces a refreshing perspective to understand the past and present of Turkish foreign policy and liberates it from the domination of geo-politics and realpolitik. Bridging the gap between the inside and the outside, this book provides a comprehensive picture of Turkey's foreign affairs in the context of globalization." - Ihsan Dagi, Middle East Technical University and Editor-in-Chief of Insight Turkey

"This book provides an in-depth analysis of the sources, attributes, achievements, and challenges of Turkish foreign policy from a much-needed perspective - one that situates foreign policy at the intersection of not just international but national struggles for democracy and identity. At a time when the direction and motives of Turkish foreign policy have gained new prominence, Kösebalaban s book is an extremely timely and important reminder of how little scholarly literature has focused on Turkey s domestic conflicts and debates on ideology, power, identity, religion, and militarism as the game-changers of foreign policy. This is a must-read book for scholars, researchers, students, political strategists, policy-makers, and anyone who has felt that domestic variables have largely been amiss, glossed over, or understudied in the academic treatment of foreign policy process of Turkey." - Umit Cizre, Istanbul Sehir University, Turkey, and editor of Secular and Islamic Politics in Turkey: The Making of the Justice and Development Party