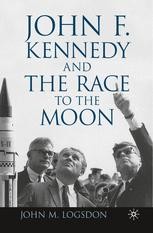 John F. Kennedy and the Race to the Moon

While there are many biographies of JFK and accounts of the early years of US space efforts, this book uses primary source material and interviews with key participants to provide a comprehensive account of how the actions taken by JFK's administration have shaped the course of the US space program over the last 45 years.

John M. Logsdon is Professor Emeritus of Political Science and International Affairs at The Space Policy Institute, Elliott School of International Affairs, The George Washington University, USA. The author of The Decision to Go to the Moon: Project Apollo and the National Interest, he appears frequently in major print and broadcast media as a commentator on American space policy.

'Echoes of this time lift off the pages of John F. Kennedy and the Race to the Moon, a new book by John M. Logsdon, a political scientist and longtime space policy specialist at George Washington University. He has drawn on new research in archives, oral histories and memoirs available in recent years to shed new light on the moon race.' The New York Times 'Some say that Kennedy conceived of the race to the moon principally to recover from the fiasco of the Bay of Pigs. John Logsdon, the doyen of American space studies, takes a more generous view in his new book Kennedy was not especially interested in space, and said as much in private. But after the Soviet Union sent Yuri Gagarin into orbit he believed it to be vital for America to take on and beat the Soviets at something very hard. The moon fitted this need like a glove. Planting a man on its surface required no big technological innovations, says Mr. Logsdon, 'just very expensive mastery over nature using the scientific and technological knowledge available in 1961.' The Economist

'Logsdon charts the evolution of JFK's thinking about space including repeated offers as president to cooperate with the Soviets from his senatorial career up until the assassination. He chronicles the intergovernmental struggle for consensus and highlights the policymaking contributions of presidential aide Ted Sorensen, science advisor Jerome Wiesner, Vice President Lyndon Johnson and NASA administrator James Webb.' Kirkus

'For the inside facts about JFK's instigation of the lunar missions, Logsdon, often seen in documentaries and television news about space, is the definitive authority.' Booklist

'A new account by John Logsdon, an eminent historian of the space program.' The Washington Monthly

'The Apollo story has been told many times, but Logsdon's analysis provides a welcome reexamination of the motives, rationales, and political infighting that characterized the Kennedy administration's space policies. Recommended.' CHOICE

'In a time when America is looking for another 'Sputnik Moment' to spur the country on a number of fronts, this scholarly and well-written look at the nation's 'Apollo Moment' captures presidential decision-making stemming from the heat of the space race between the United States and the former Soviet Union. Readers will find this book a treasured resource. Logsdon's devotion to this book is visible through and through including an invaluable and insightful set of notes for each chapter. Beyond the U.S. President, you'll find a landscape of people that also helped shape that 'one small step' off planet. A must-read.' The Coalition for Space Exploration

'John F. Kennedy and the Race to the Moon is informed not only by Logsdon's first book but by 40 years of his own and others' scholarship and in that regard it sets the new gold standard for all academics who study space not just on Kennedy and the initiation of the space race but on how the complex decisions governing the American space program have often depended on the intersection of chance, opportunity, political motive, and cold-hearted, cost-benefit analysis rather than dreamy aspirations 'to boldly go where no man has gone before.'' Quest: The History of Spaceflight Quarterly

'In John F. Kennedy and the Race to the Moon, historian John Logsdon examines the political forces that shaped space policy in the tragically brief tenure of the Kennedy Administration. Logsdon is returning to familiar ground: in 1970 he published The Decision to Go to the Moon: Project Apollo and the National Interest, one of the first books to examine the rationale for embarking on such a risky, expensive endeavor. Why revisit the topic now? As Logsdon notes in the book's preface, a lot of key documents from that era have been released in the intervening years; the 1970 book had been based primarily on interviews with key players and secondary sources, with the research mostly completed prior to Apollo 11 itself. And, just as important, the perspective that four decades of distance provides offers a new perspective on the events of that era and their aftermath.' The Space Review

'A comprehensive and insightful retrospect of the conception and early days of Project Apollo. Space aficionados will see immediate parallels between President Kennedy's thought processes and the space policy debates of today.' Neil Armstrong, Commander, Apollo 11

'In contrast to the hesitations, reconsiderations, and cancellations that have plagued recent U.S. activities in space, President John F. Kennedy's shining May 25, 1961, challenge to send humans to the Moon remains a beacon of national resolve. John M. Logsdon's review of the whole history of President Kennedy's civil space policy, especially events after the May 25 speech, reveals the special circumstances that kept the lunar goal on track. Hesitation arose, but Kennedy's pragmatism ultimately prevailed. Logsdon explains why. With this insightful analysis, Logsdon demonstrates again why he remains the dean of space policy historians.' Howard E. McCurdy, Professor of Public Policy, American University and University of Washington, and author of Space and the American Imagination

'John Logsdon's book is a high quality scholarly work, deeply researched, but also an easy read. It is an insightful history of JFK's decision to use the space program and especially the Apollo lunar landing project as a rational Cold War response to the perceived 'missile gap' and the Soviet space challenges of Sputnik and Yuri Gagarin's flight.' Bill Anders, Astronaut, Apollo 8, and Executive Secretary, National Aeronautics and Space Council, 1969-1972

'One of the definitive political histories of the quest to put a man on the Moon.' Matthew Brzezinski, author of Red Moon Rising

'John F. Kennedy and the Race to the Moon provides a comprehensive, insider's account of one of the most important and far-reaching policy decisions of the Kennedy administration. It is a masterful case study of presidential decision making.' Professor Steven J. Wayne, Presidential Scholar, Georgetown University

'An extraordinary book on the genesis of Project Apollo . . . Indeed, the first clear and definitive account of the pivotal role played by John F. Kennedy in shaping the American space program. How President Kennedy reached his fateful decision to enter the space race to reach the Moon is now told fully in an insightful and authoritative way.' Von Hardesty, Curator, Smithsonian National Air and Space Museum