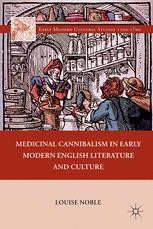 The human body, traded, fragmented and ingested is at the centre of Medicinal Cannibalism in Early Modern English Literature and Culture , which explores the connections between early modern literary representations of the eaten body and the medical consumption of corpses.

LOUISE NOBLE lecturer in the English Department of the School of Arts at the University of New England, Armidale, New South Wales, AUSTRALIA.

"Medicinal Cannibalism in Early Modern English Literature and Culture is one of those rare books that transforms one's understanding of cultural history. Its originality lies in the way it systematically opens up the bizarre contradiction in early modern attitudes to cannibalism, which enabled the extreme horror of anthrophagous violence that informs the fantasies of new world discovery to co-exist with Europeans' routine consumption of human tissue in the form of pharmaceutical 'mummy'. In the process Noble's analysisgenerates superb close readings ofmajor literarytexts, rendering them(as the best criticism always does) fascinatingly unfamiliar." - Michael Neill, Emeritus Professor of English, University of Auckland

"Great sensitivity, learning, and empathy for the medical practices of the past are on rich display in Medical Cannibalism in Early Modern English Literature and Culture. Noble uncovers the almost taboo subject of the early modern mummy - the medical corpse which provided healing fluids revered by medical practitioners all over early modern Europe for its potency. Students of Shakespeare will remember Othello s handkerchief, dyed in mummy conserved of "maidens hearts." But Noble follows the trail of mummia much further, unpacking the literary tradition elsewhere in Shakespeare, in The Faerie Queene and Donne s Devotions Upon Emergent Occasions in order to show its metaphorical suggestiveness for the body s transmutations over time. Noble wants to show the natural desire for health and wholeness that underlies the bizarre early modern uses of the medical corpse but she almost makes a compelling case for connections between early modern uses of corpse matter and the contemporary traffic in body parts for organ donation and transplantation. Hers is a narrative of wonder and weirdness made understandable, a fascinating case study of the body s inexhaustible semiotic potential in the hands of ingenious literary and medical practitioners." - Gail Kern Paster, Director, Folger Shakespeare Library

"This is an important book. Noble's study of early modern literary and dramatic treatments of corpse pharmacology, as she calls it, not only persuades the reader that the medicinal consumption of dead human flesh was central to the early modern cultural imaginary;it also makes a compelling case for why the early modern trade in mummy is of pressing importance to us now." - Jonathan Gil Harris, Professor of English, George Washington University