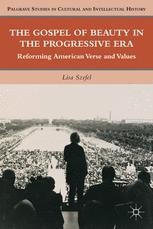 The Gospel of Beauty in the Progressive Era

Szefel investigates the use of poetry in addressing political reform at the turn of the twentieth century. It charts the work of poets and editors - many of whom were women and minorities - who created a network of organizations to nurture writers who addressed the problems wrought by Progressive-era capitalism.

'...blessedly well written...the research and archival work that inform The Gospel of Beauty in the Progressive Era are its strengths. Szefel cogently tells the story of how ideas, readers, and American poetry changed together between 1890 and 1922, and the book is engagingly sympathetic..' - The Journal of American History

'In this beautifully written book, Lisa Szefel examins the renaissance of modern American poetry between 1910 and 1920 The Gospel of Beauty in the Progressive Era is a significant contribution to Progressive Era and intellectual historiography.' The Journal of the Gilded Age and Progressive Era

'In this original and elegantly written account, Szefel traces the rise of a progressive-minded poetry movement that, between 1910 and 1920, developed alongside the social reform efforts of the era. Well-known poets such as Amy Lowell, Carl Sandberg, and Robert Frost enter her story, but Szefel gives us an appreciated introduction to more obscure figures like Edwin Markham, Harriet Monroe, and William Stanley Braithwaite. In doing so, she welcomes us into a circle of poets largely neglected in American cultural histories of the period. Szefel has filled an enormous gap in literary and intellectual histories of the Progressive era.' The Blog of the Society for U.S. Intellectual History

'In this superbly researched, superbly written book, Lisa Szefel sets out, with quiet urgency, to rehabilitate the genteel, writers whose work, though it has long been vanishing from anthologies, meant much more to hearts of multitudes of Americans than the work of (say) Ezra Pound. Szefel's book will be a necessary text to historians trying to understand the role of poetry in American domestic life; and it should be read in English departments too, because the genteel poets she brings to life are the necessary terms of comparison to elucidate the achievement of the Modernists.' Daniel Albright, Professor of English, Harvard University

'In elegant and clear prose, The Gospel of Beauty in the Progressive Era makes and supports the argument that poetry was as much a part of the Progressive Era as muckraking journalism and reform legislation. It shows how important poets were to the critical political project of raising consciousness; what is more, it provides a rich and deep account of the origins of American modernism. This book is ambitious, smart, and rewarding.' Alexis McCrossen, Associate Professor of History, Southern Methodist University

'In crisp, clear prose, Lisa Szefel makes the complex poetic world of the United States in the early twentieth century come alive. She shows how, contrary to Auden, poetry makes much happen, presenting a panorama of the founding moments of American modernism as linked with political and social movements. Ah, if only poetry resonated as such today.' George B. Cotkin, Professor of History, California Polytechnic State University

'This book of literary history is an important corrective to studies of modern American poetry because it shifts our critical lens from European and American ex-patriots to U.S. regionalists, and from canonical poets to editors rarely acknowledged for their work in constructing the conditions by which those poets became canonical. Szefel persuasively argues for an interstitial space between the 'genteel' nineteenth-century versifiers and the avant-garde practitioners in the U.S., a crucial gap in which a few critically neglected, often controversial figures sought successfully to revive a genre that had fallen in importance in a nation whose catchwords were science, technology, manufacturing, and efficiency.' Lara Vetter, Assistant Professor, Department of English, University of North Carolina at Charlotte