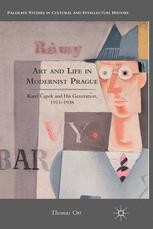 Art and Life in Modernist Prague

In most contemporary historical writing the picture of modern life in Habsburg Central Europe is a gloomy story of the failure of rationalism and the rise of protofascist movements. This book tells a different story, focusing on the Czech writers and artists distinguished by their optimistic view of the world in the years before WWI.

“Ort sets out to explore Čapek’s life, work, and intellectual background as well as the cultural life in Prague of the early twentieth century. … There is no doubt the book is well-researched and sheds light on many aspects of cultural life in modern Prague. … his analysis manages to capture how rich and intertwined the worlds of literature, philosophy, architecture, and the visual arts were in Prague in the first few decades of the twentieth century.” (Marta Filipova, Austrian History Yearbook, Vol. 48, 2017)

"Ort's text should be of interest to students not only of Slavic literature and history but of European modernism in general. Summing Up: Highly recommended." - CHOICE

"Thomas Ort is a pleasure to read... his writing is lucid and unpretentious." - Times Literary Supplement


"Ort's text should be of interest to students not only of Slavic literature and history but of European modernism in general. Summing Up: Highly recommended." - CHOICE

"Thomas Ort is a pleasure to read... his writing is lucid and unpretentious." - Times Literary Supplement

"Karel ?apek still has not received the attention he deserves in the Anglo-American world, and Czechoslovakia still has not been fully assimilated into our picture of interwar Europe. Thomas Ort accomplishes both tasks beautifully by integrating ?apek's generation into the intellectual history of twentieth-century Europe. Ort is fascinated by the way the mind gives order to the world, and he describes a generation preoccupied with the relationship between creative life and the fixity of forms. Full of compelling ideas and formulations, this book will be valuable for students of history, art, and literature—and for anyone who wants to understand the early twentieth century." - David S. Luft, Horning Professor in the Humanities and Professor of History, Oregon State University, USA

"This is an important, judicious, and lucidly written contribution to the growing field of Central European modernism. Thomas Ort's compelling portrait of Czech artistic life before and after World War I adds important new insight into the interconnections between aesthetics and politics during this turbulent period." - Mary Gluck, Professor of History, Brown University, USA

"Elegantly written and thoughtfully argued, Art and Life in Modernist Prague challenges long-standing assumptions about fin-de-siècle culture, interwar Czechoslovakia, and early-twentieth-century liberalism. Strengthened, not weakened, by World War I, Karel ?apek's liberal variety of modernism may have come to a brutal end in 1938, yet it remains one the most innovative - and underappreciated - cultural projects of his time. This outstanding book will surely become a must-read for scholars of Habsburg Central Europe and modern European thought alike." - Chad Bryant, Associate Professor of History, The University of North Carolina at Chapel Hill, USA