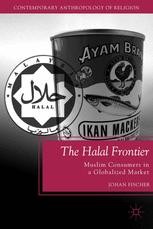 Muslim Consumers in a Globalized Market

In The Halal Frontier Johan Fischer shows that halal (literally lawful or permitted) is no longer an expression of esoteric forms of production, trade and consumption, but part of an expanding globalised market. This book explores modern forms of halal understanding and practice in the halal consumption of middle-class Malays in the diaspora.

JOHAN FISCHER is an Associate Professor in International Development Studies in the Department of Society and Globalisation at Roskilde University, Denmark. He has been a visiting research fellow at both the National University of Singapore and Goldsmiths College, University of London and has been a Teaching Fellow at the University of Copenhagen. He has spent years doing fieldwork in Malaysia and the UK and worked with NGOs in Thailand and South Africa. He is the author of Proper Islamic Consumption (Nordic Institute of Asian Studies Press) and numerous articles and chapters in edited collections.

'Provide[s] important and fresh insights into the dynamic interaction between competing halal discourses, between producers and consumers, and between Malaysian 'state' Islam and the diasporic realities of London's Muslim minority . . . Fischer's book will be highly useful for anyone interested in modern Malaysian society as well as the struggle of diverse Muslim diaspora communities to keep the faith." - Journal of Southeast Asian Studies

"This book is essential for those concerned with commodity production, consumption, and circulation in the interstices of science and religion, as well as religious space-making strategies among diasporic communities." - Anthropology News

"A highly readable account of the globalization of halal food . . . [The Halal Frontier] makes significant contributions to discussions of contemporary Islam, particularly with regard to the articulation of Islam and modernity, the role of Islam in subject formation, and the politics and micro-politics of Islamic practice and would be [of] interest to a range of scholars, from specialists in Islam to undergraduate students." - Contemporary Islam

"Although positioned in anthropology, the book offers a great many interesting points to international marketing theory and practice. The book's core value lies in demonstrating how macro . . . and micro factors . . . affect the production, distribution, and consumption of food among Muslim consumers . . . Overall, the book is rich in terms of providing multiple insights into the complexities associated with regulating and practicing the Halal." - International Journal of Market Research

"Fischer's short study provides a fascinating window into numerous topics of extreme importance to anthropologists, while offering greater insight into the moral and practical concepts and concerns of Muslims in the West and even in Muslim-majority societies - concepts and concerns shared, always in locally-specific forms - by members of all religions in all parts of the modern world." - Anthropology Review Database

"The Halal Frontier is a work of anthropology, but extremely relevant for the field of Islamic Studies as well . . . examining contemporary forms of hal?l consumption, it touches upon issues of Islamic Law, politics of religion, religious authority, religious life as well as the transformation of religious practices and doctrines in the diaspora. Johan Fischer has authored an anthropological study that is based on a profound knowledge of the subject matter and is convincingly embedded in a larger context, thereby offering a valuable contribution to a field of research that is of growing importance within Islamic Studies, but cannot be adequately understood by text-based methods alone. This contribution is particularly innovative as it is not merely based on ethnographic field work, but also on the analysis of the material culture underlying the topic: the production, certification and sale of hal?l products." - Orientalistische Literaturzeitung

"Today, the rapidly growing 'halal' economy transforms mundane acts of shopping and consumption into acts of conspicuous piety among millions of consumers from Kuala Lumpur over the Middle East to London. This innovative study is a must read for anyone interested in the material dimensions of religion in the contemporary world." - Thomas Blom Hansen, Reliance-Dhirubhai Ambani Professor in South Asian Studies and Professor in Anthropology, Stanford University, USA

"In this fascinating study of halal regulating and producing, Fischer illuminates an oft-neglected example of globalization. He shows how Malaysian halal regulation is in fact the regulation of what it is to be a Muslim and traces its interface with the liberal marketplace of halal-authorizing in Britain and discourses of science and animal rights." - John Richard Bowen, Dunbar-Van Cleve Professor in Arts & Sciences, Washington University in St. Louis, USA

"When Tesco, the second-largest retailer in the world, makes a major commitment to source halal products, you know something big is afoot in the landscapes of food politics, global consumption, and religious piety. Tracking the role and transformation of halal consumption between the Malaysian middle class and its Diasporas in London and beyond, Fischer has authored a compelling and highly readable account of science, sanitization, and the dilemmas of secularism for Muslim Malays and/as everyday consumers. A remarkable and unique book." - Bill Maurer, Professor of Anthropology and Professor of Law, University of California, Irvine, USA