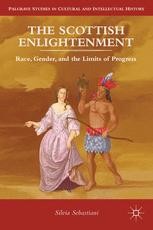 Race, Gender, and the Limits of Progress

The Scottish Enlightenment shaped a new conception of history as a gradual and universal progress from savagery to civil society. Whereas women emancipated themselves from the yoke of male-masters, men in turn acquired polite manners and became civilized. Such a conception, however, presents problematic questions: why were the Americans still savage? Why was it that the Europeans only had completed all the stages of the historic process? Could modern societies escape the destiny of earlier empires and avoid decadence? Was there a limit beyond which women's influence might result in dehumanization? The Scottish Enlightenment's legacy for modernity emerges here as a two-faced Janus, an unresolved tension between universalism and hierarchy, progress and the limits of progress.

Silvia Sebastiani is Maître de Conférences (Associate Professor) at the École des Hautes Études en Sciences Socials in Paris, France, where she teaches seminars on the experiences and ideologies of race in the early modern period and on Enlightenment historiography, and coordinate the group of research mondes britannique.

“The detailed and nuanced account of the disputes about human diversity, race, and gender at the heart of the stadial theories of the Scottish Enlightenment makes a substantive contribution to the fields of Enlightenment studies, critical race theory, gender studies, and the history of ideas. Scholars in these disciplines as well as interdisciplinary scholars who share an interest in these themes will find in this work a wealth of resources.” (Edinburgh University Press, euppublishing.com, Vol. 14 (2), June, 2016)

Shortlisted for the Istvan Hont Prize.

'The most important study of the eighteenth-century Scottish historians since Colin Kidd's Subverting Scotland's Past It is a book which establishes Sebastiani as one of the leading European intellectual historians of her generation.' - John Robertson, University of Cambridge, UK

'Sebastiani's provocative and persuasive contribution to studies of Enlightenment thought demonstrates the centrality of arguments about progress and their complex connection to notions of national character, race, gender and nation.' - John Brewer, Eli and Edye Broad Professor of Humanities and Social Sciences, California Institute of Technology, USA

'Silvia Sebastiani's study offers important new insights into the Scottish Enlightenment that both deepen and defamiliarize our understanding of the progressive histories that emanated from eighteenth-century Scotland.' - Karen O'Brien, Pro-Vice-Chancellor for Education, University of Birmingham, UK

<'Silvia Sebastiani teases out the complex relationship between progress, civilization, and human difference in the Scottish Enlightenment She adds immeasurably to our understanding of the eighteenth-century 'Science of Man' and its legacies to modern thought.' - Barbara Taylor, Professor of Humanities, Queen Mary, University of London, UK

'It is real pleasure to see Silvia Sebastiani's fine study in an English edition. Every student of the Scottish Enlightenment will benefit from a book that provides such lucid commentary on many central issues of this critical period.' - Mark Salber Phillips, Professor of History, Carleton University, Ottawa, Canada

'In this well-researched, insightful book, Silvia Sebastiani delivers the first extensive analysis of race and gender in Scottish Enlightenment thought. In the process, she deftly investigates previously under-explored aspects of eighteenth-century debates.' - Richard B. Sher, author of The Enlightenment and the Book