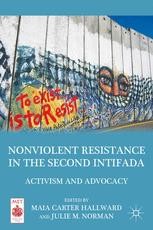 Nonviolent Resistance in the Second Intifada

Offering diverse perspectives from scholars, practitioners, and activists, this bookillustrates the potential strengths and challenges of unarmed resistance in Palestine by Palestinians as well as of internationals and Israelis acting in solidarity.

Maia Carter Hallward is Associate Professor in the Deptartment of Political Science and International Affairs at Kennesaw State University, USA.

'This volume is a fresh and exciting new contribution. Bringing together scholars and practitioners, it analyzes the oft-overlooked diversity of acts of unarmed protest, persuasion, intervention, and noncooperation that occurred during the second Intifada. It also shows us the rich range of actors, relationships, and ideas involved in those campaigns. The book's strength lies in its being firmly grounded in field research and first-hand experience, while not shying from such larger themes as power, solidarity, religion, and strategy. This is valuable reading for anyone wanting a nuanced appreciation of the Palestinian struggle today, or indeed a deeper understanding of what nonviolent resistance means in theory and practice.' - Wendy Pearlman, Northwestern University, author of Violence, Nonviolence, and the Palestinian National Movement

'Maia Carter Hallward and Julie M. Norman are to be commended for bringing together this collection of scholarly yet experience-based essays dealing with the grossly underpublicized subject of nonviolent resistance during the second intifada. This book admirably fulfils its stated primary task of 'bringing attention to the breadth and complexity of nonviolence.' Importantly, it discusses the roles of Israeli and international solidarity activism and the pitfalls of donor-dictated NGO-ification and of dialogue where 'issues that relate to the daily lives and collective problems of Palestinians and Israelis are avoided,' as well as describing the widespread practices of sabr and sumud ('patience' and 'steadfastness,' but much more than that) - all of which are too often omitted from reviews of nonviolent resistance in Palestine. Of interest to readers outside Palestine-Israel, in particular, are chapters dealing with Boycott, Divestment and Sanctions and the Free Gaza Movement - which clearly illustrate some ways in which internationals are taking an active role in Palestinian-led-or-initiated nonviolent campaigns. Nonviolent Resistance in the Second Intifada: Activism and Advocacy is an important addition to the literature of a much-misunderstood period in the recent history of nonviolence.' - Maxine Kaufman-Lacusta, author of Refusing to be Enemies: Palestinian and Israeli Nonviolent Resistance to the Israeli Occupation (Ithaca Press 2010)