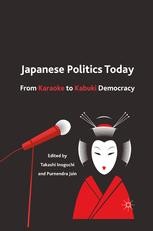 From Karaoke to Kabuki Democracy

Japanese politics now, with seven prime ministers appointed within this decade and the second major political party turnover taken place within the last two decades, is undergoing a great transition. This book explores the gradual shift from what the editors call karaoke democracy to kabuki democracy.

"Japanese politics has gone through several transformations in the past, albeit all under the LPD party until its defeat by the DJP in 2009. At this critical juncture in the history of Japanese politics, Takashi Inoguchi has once again written a remarkably insightful book on Japanese politics and on three distinguished prime ministers, Yoshida, Tanaka, and Koizumi. He writes that the bureaucrat/expert-dependent, consensus-building, organic politics which he defines as 'Karaoke democracy' has given way to an inorganic, individualistic politics nicknamed 'Kabuki democracy' and epitomized by Koizumi, a go-alone leader who pursued aggressive policies to meet the demand of globalization and digitalization. This is a story of Japanese politics at the point of inflection. We will have to wait for another masterpiece of political analysis by Inoguchi on why Koizumi s successors continue to fail to replicate what he has done so successfully and when future leaders of Yoshida/Tanaka/Koizumi s caliber will appear again in Japan."

- Ikuo Kabashima, governor, Kumamoto Prefecture, Japan"This work is unique in identifying the evolution of modern Japanese politics with the broader evolution of its society. The movement has been from 'Karaoke democracy' (bureaucratic centered) to 'Kabuki democracy' (dependent upon leader s connection with the citizenry). Thus successful leaders in modern times have been those who in both temperament and policy have been attuned to the citizenry as a whole. This analysis provides a new understanding of modern Japanese politics and is of value to veteran scholars as well as students."

- Robert A. Scalapino, Robson Research Professor of Government & Emeritus of Political Science, University of California, Berkeley"Japanese Politics Today, edited by Takashi Inoguchi and Purnendra Jain, is not just extraordinarily timely, but prophetic. It is a story of the replacement of classical predictability in politics by uncertainty, and also by transparency and by accountability. This is so in Japan when one examines prime ministers and parliament, the national bureaucracy and the social services, local politics and even the media. This book is simply a must for anyone who wants to understand what politics in Japan - but also elsewhere - is becoming and is about to become even more after the 11th March drama."