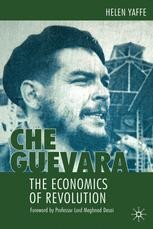 The Economics of Revolution

Che Guevara remains an iconic figure, four decades after his death. Yet his most significant contribution - his work as a member of the Cuban government  - is rarely discussed. This book explores his impact on Cuba's economy, through fascinating new archival material and interviews.

HELEN YAFFE completed her doctoral thesis in the Economic History Department at the London School of Economics, with an ESRC studentship. She then went on to an ESRC Postdoctoral Fellowship at the Institute for the Study of the Americas, University of London and is now a Latin American history Teaching Fellow at University College London. She has worked on a variety of newspapers and publications and has presented papers at conferences and seminars. She has an article in the March 2009 issue of the journal Latin American Perspectives - a special issue commemorating the 50th anniversary of the Cuban Revolution.

The book is an exciting, well written and well-documented narrative and analysis of Che's economic thought, based on years of research with primary (interviews and unpublished files) and secondary sources What is unique about Yaffe's book is her impressive use of new, until now unexplored, Cuban sources: archival material including manuals, annual reports, factory inspection reports, transcripts of the internal meetings at the Ministry of Industry, led by Guevara, and last but not least, interviews with nearly 50 of Che's closest collaborators. In this sense, it is safe to suggest that Helen Yaffe's book is to date the most complete account of the economic thought of Ernesto 'Che' Guevara. - Claes Brundenius, Journal of Latin American Studies

"Che Guevara, whose unorthodox economic philosophy has recently been uncovered in a brilliant book by Helen Yaffe, Che Guevara: The Economics of Revolution..." - Richard Gott, The Guardian

'This is really an excellent study. I suspect that few 'bourgeois' economists would be even slightly persuaded by Yaffe's arguments, much less Guevara's, but considered as a monograph, Yaffe's book is exhaustively researched, interesting, coherent, well-organized and written, novel, and, frankly, quite provocative in places.' - Richard J. Salvucci, Economic History Review

'The importance of this book is in its knowledge of Che Guevara, and in improving the theory of socialist development, as a theory in construction and permanent enrichment given new contemporary experiences accumulating in difficult conditions in the 21st century. The result is a book that cannot be ignored, a book that should be translated into Spanish and other languages as soon as possible. It is not perfect, as no human work can be; but everyone who reads it should feel the duty of participating in the discussion and analysis that Helen Yaffe presents in this work, with the same rigour and objectivity with which she has done so.' - Dr Jesus Pastor Garcia Brigos, London School of Economics, IDEAS, Latin America Programme

' Helen Yaffe's Che Guevara: The Economics of Revolution must represent one of the most important contributions to debates about Marxist economics of recent years. As a highly original exposition of Guevara's personal thinking and achievements in the broader effort to create a revolutionary economy, Yaffe's work fills an important gap in the economic history of post-revolutionary Cuba. But as a reminder of the concrete commitment to revolutionary change that Guevara has been immortalised for in such idealistic terms, amid renewed debate about the form taken by global capitalism and the revival of state ownership and redistribution across Latin America, this book makes essential reading.' - Gavin O'Toole, Latin American Review of Books

'Thanks to Helen Yaffe, readers in the English-speaking world now have a chance to discover a Che who was a profound economic thinker and doer, not in addition to his life as a revolutionary, but as an inseparable part of it. Even a much longer review could not give an adequate idea of the scope of this work, based upon hundreds of books, documents, reports and interviews. It provides a mass of detail in areas from science to workers' participation, from investment to psychology, without ever losing track of the main threads or becoming bogged down. I can't think of enough superlatives to describe it.' - Allen Myers, Direct Action

'With the passion of an activist and the erudition of an academic, Helen Yaffe's new book examines Che's contribution to Cuba's economic development and socialist political economy.' - Enrico Tortolano, Tribune

'Helen Yaffe's book demonstrates how good history can make a timely and valuable contribution to contemporary debates. The socialist thought of 'Che' Ernesto Guevara (on top of his heroic guerrilla and internationalist role) has special relevance for the current global economic crisis and the strong resurgence of socialist-inspired 'alternatives' in Latin America.' - Tim Anderson, University of Sydney

'This book is a rarity in studies of Che Guevara, by offering something genuinely new that goes well beyond the familiar tendency to romanticise or to present one-dimensional images. Using fascinating new sources, Yaffe gives us a detailed and knowledgeable picture of a different Che - the minister and economic manager, grappling with the real (as opposed to theoretical) challenges and practicalities of creating a revolutionary economy in an underdeveloped society, but doing so without losing sight of his genuinely innovative challenge to socialist orthodoxy. The result is a valuable contribution to our understanding of Guevara but also to debates on the Left.' - Tony Kapcia, Professor of Latin American History, University of Nottingham, UK

'Yaffe has no full peers. This book presents an insightful and fascinating exposition of the path of development of Guevara's economic ideas. Yaffe's book makes an unparalleled stride to fill a gaping hole in the literature: Guevara as an economic theorist and practitioner.' - Frank Thompson, Lecturer in Economics, University of Michigan, US

'Helen Yaffe has produced a very important book which can only be described as essential reading for all socialists. On the basis of 60 interviews with Che's former colleagues and extensive archival research, including consultation of Guevara's crucial notes for a critique of the Soviet Manual of Political Economy, Yaffe gives us unprecedented insight into his vital contribution to the Cuban Revolution and to Marxist theory. One thing is certain: for anyone engaged in the struggle for a better world, the thought of Che Guevara is a fundamental point of departure, and this book is an essential work of reference.' - Diana Raby, Honorary Senior Research Fellow at the Institute of Latin American Studies, University of Liverpool, UK

'The book captures the enormous energy of Guevara...This is an important and interesting book...' - The Spokesman

'...a book that is well researched and offers an innovative portrait of one of the most unique individuals of the twentieth century.' Bulletin of Latin American Research.