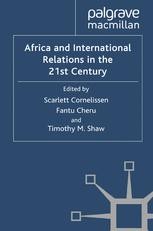 Africa and International Relations in the 21st Century

This book examines key emergent trends related to aspects of power, sovereignty, conflict, peace, development, and changing social dynamics in the African context. It challenges conventional IR precepts of authority, politics and society, which have proven to be so inadequate in explaining African processes. Rather, this edited collection analyses the significance of many of the uncharted dimensions of Africa's international relations, such as the respatialisation of African societies through migration, and the impacts this process has had on state power; the various ways in which both formal and informal authority and economies are practised; and the dynamics and impacts of new transnational social movements on African politics. Finally, attention is paid to Africa's place in a shifting global order, and the implications for African international relations of the emergence of new world powers and/or alliances. This edition includes a new preface by the editors, which brings the findings of the book up-to-date, and analyses the changes that are likely to impact upon global governance and human development in policy and practice in Africa and the wider world post-2015.

"This book explodes the myth that Africa is peripheral to International Relations theory. Through richly insightful analyses of governance and security in Africa, the authors establish that informal loci of authority, transnational complexes and non-state security arrangements challenge mainstream IR's insistent focus on the state as the primary unit of analysis. This volume should be required reading for scholars, students and policymakers who are interested in current debates on sovereignty and statehood, as well as in Africa's role in the changing global economy." Sandra Maclean, Simon Fraser University, Canada

"This is a very timely and invaluable contribution that advances our understanding of Africa's unanticipated "second chance" in the post bi-polar era and second decade of the 21st century. The volume intricately weaves critical perspectives on power, sovereignty, conflict, peace, and Africa's changing social dynamics together to create a seamless treatise of compelling scholarship. For anyone interested in African international relations, this is a must read." - Kobena T. Hanson, African Capacity Building Foundation, Zimbabwe

"As Jean-François Bayart's L'Etat en Afrique challenged statehood in Africa in the 1980s , Africa and International Relations in the 21st Century defeats conventional precepts of authority, sovereignty and security in Africa and beyond. It pictures a hybrid political order of state and non-state governance, with new state-civil society relationships and instructive informal dimensions of regional integration. It powerfully illustrates how authority is nowadays reterritorialized from below, reconstructing even the state." Cristina D'Alessandro, Sciences Po, France

"This is an outstanding collection of original, clear, and incisive essays that cover all the major issues in Africa today. It is the perfect book around which to organize a rigorous course on Africa in the world." Craig Murphy, Wellesley College, USA

"A worthy collection of considered and strong scholarship that puts the debates on Africa's position in the global economy beyond the current euphoria and exuberance! A must read to appreciate the continent in today's rapidly changing world." George Kararach, The African Development Bank

"This important collection brings to the fore the dynamics and processes that are shaping and re-shaping Africa's international connections. At a time when the continent is said to be 'rising', critical thoughts on Africa's place in world affairs are needed as perhaps never before." Ian Taylor, University of St Andrews, UK

"Africa, we are told, is a playground where the world competes and a place that too often fails expectations. Africa and International Relations rejects these tropes and challenges the reader to see the continent differently. It is an important addition to a growing body of literature that refuses to accept pre-packaged notions of Africa in the world." - Larry A. Swatuk, University of Waterloo, Canada