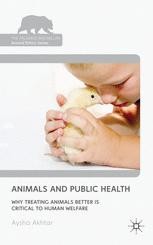 Why Treating Animals Better is Critical to Human Welfare

A compelling argument of how human health is adversely affected by our poor treatment of non-human animals. The author contents that in order to successfully confront the 21st Century's health challenges, we need to broaden the definition of the word 'public' in public health to include non-human animals.

AYSHA AKHTAR is a neurologist and public health specialist, a Fellow of the Oxford Center for Animal Ethics and works with the Office of Counterterrorism and Emerging Threats of the U.S. Food and Drug Administration.

'In this book Aysha Akhtar accomplishes what no other recent author has managed to do in a book on human health: provide a cogent and balanced argument for the importance of accepting the intimate relationship between humans and other animals for our own health, that of other animals, and of the planet. The wonder of this book is that Akhtar is able to effectively combine a wealth of scientific information with arguments for compassion for other animals. In doing so, she elegantly shows that concerns for the welfare of humans and other animals are not at odds, but, rather, one and the same issue. We are all in this together.' - Lori Marino, Emory University, USA

'Dr. Akhtar's theme is that unless we improve our treatment of non-human animals, we humans will never find good health. How we treat animals impacts our own welfare. She indicates that there is a connection between cruelty toward animals and violence toward humans. Those who abuse non-human animals also tend to abuse humans, particularly women and children. The growing worldwide demand to eat flesh (meat) is also having an effect. Shipping animals and their parts around the globe for entertainment, for fur and food has produced dangerous epidemics in humans. Factory farms pollute our land, water, and air. Using animals in experimentation has led to serious illnesses in humans. Despite the link between human and non-human animal welfare and health, animal welfare issues infrequently have been discussed in public forum. When the subject of animals does enter discussions on human health, it is usually to highlight how animals are sources of infection and injuries to humans, rather than the importance of animal protection in general. Traditionally, these fields have been either largely apathetic to animal suffering or they see animal protection as being in opposition to the goal of human protection. Her book demonstrates that we do not need to think this way and that in fact animal welfare promotes human welfare. This is an excellent book. The message is one we all need to appreciate and the book is well written.' - William Clifford Roberts, MD, Executive Director, Baylor Heart and Vascular Institute

Editor in Chief, The American Journal of Cardiology, USA

'Aysha Akhtar's book presents a rich, stimulating, and provocative body of material on one of the most important and understudied moral problems in the modern world. Her emphasis on the connection between animal welfare and public health is innovative and makes a substantial contribution to the available literature. The book will be a leading work in this area of animal ethics.' -Tom Beauchamp, Professor of Philosophy and Senior Research Scholar, Kennedy Institute of Ethics, Georgetown University, USA