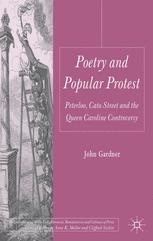 This book provides provocative information on poetry written in response to the most revolutionary set of events seen in Britain since the 1640s: 'Peterloo', a peaceful protest that became a massacre; 'Cato Street', a government scripted rebellion; and the 'Queen Caroline Controversy', when the estranged wife of George IV tried to claim her crown.

JOHN GARDNER is Principal Lecturer in English Literature at Anglia Ruskin University, UK, where he has worked since 2004, having previously taught at the University of Glasgow. He has published on a range of authors and topics, mainly on nineteenth-century literary culture.

"A much-needed, invigorating and provocative insight into an explosive moment in literary and political history: Gardner's close readings of both lesser-known and canonical Romantic poetry shed new light on the plebeian counter-public sphere in one of its most high-profile confrontations with the unreformed Regency state. A very welcome addition to studies of Romantic print culture." Professor Ian Haywood, Roehampton University, UK

"Poetry and Popular Protest is a daring book in which Gardner presents interpretations of individuals and works that sometimes go against the grain of the more commonly accepted Romantic narratives . . . Gardner's accounts are . . . remarkable for their clarity, for their comprehensiveness, and for the original archival research that he brings to bear on the historical narrative. The account of Peterloo in particular is among the best available anywhere. . . . Gardner's study offers a wealth of material for further speculation and further research . . . Indeed, if good scholarship is as much a matter of seeing new, potentially revisionary lines of development in the archival and print record as it is a matter of forwarding a particular thesis, then Poetry and Popular Protest is really exceptional." The European Romantic Review

"Gardner is also concerned to demonstrate that poets do not work in isolation, but write out of their engagement with larger social groups and conversations . . . he recounts their stories well and brings a fresh perspective through his emphasis on the dialogue between 'high' and 'low' culture, canonical and noncanonical writers." Studies in English Literature

"John Gardner's study of the interconnections between poetry and protest continues in the spirit of E. P. Thompson . . . bold . . . engaging and insightful . . . Poetry and Popular Protest builds on work by scholars including Olivia Smith, Marcus Wood, Iain McCalman, and Ian Haywood, but is the first study to concentrate exclusively on these three events. . . . John Gardner relishes in this engaging and insightful account of a brief, but absorbing, chapter in nineteenth-century culture." Notes and Queries

"Scholars of the Regency years will find much to enlighten them here, and in telling detail . . . Gardner's volume thus offers a learned contribution to continuing discussion about the years in which, as he comments, public opinion was governed by the drama played out in the political prints." Times Higher Education

"This thought-provoking and fascinating study of a short moment in British political and literary history brings together writing of every kind from elite poetry to street doggerel. Through analysing all forms of print culture it brilliantly reveals how much was at stake in the years from 1819 to 1821 and how decisive and long-lasting - was the victory of the small ruling elite over the forces of reform." Professor Janet Todd, University of Cambridge, UK

"Gardner's study is a valuable contribution to our understanding of a literary and political period that promises to attract more attention in the future." Romanticism

"This is an impressive and very entertaining book, combining politics, literary criticism, cartoons, sexual and political scandal, and a fascinating slice of social history. It is, moreover, one of the few academic monographs that can be genuinely recommended to the general and non-specialist reader." Stephen Prickett, Review 19

"[E]xcellent, lively, and readable study Gardner helps us towards new perspectives both on specific Romantic writers and on the development of nineteenth-century literature, popular culture and radicalism." Felicity James, The Byron Journal

"Narrowing his study on poetry that responds to three key political events gives Gardner the opportunity to get to the core of a complex intermeshed network of poets, publishers and pamphleteers. He makes insightful and fascinating connections across a spectrum of canonical and non-canonical writers, such as Shelley, Bamford, Byron and Hone." Lucy Hodgetts, The Byron Journal

"...one of the most stimulating and intelligent books yet written about the relationship between poetry and politics in the Romantic period." Year's Work in English Studies

"In shedding welcome light into some murky corners of early nineteenth-century social, political and literary history, this study makes some shocking revelations... this is a valuable addition to the debate on poetry and radicalism in the post waterloo period." R. M. Healey, Charles Lamb Bulletin