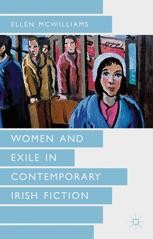 Ellen McWilliams is Lecturer in English Literature at the University of Exeter, UK. She is the author of Margaret Atwood and the Female Bildungsroman (2009) and has received a number of awards for research, including an Arts and Humanities Research Council Early Career Fellowship (2011) and a Fulbright Scholar Award (2012).

"Women and Exile in Contemporary Irish Fiction is a concise and lucid treatment of a still neglected aspect of Irish literature. It conveys sometimes quite complex ideas in a coherent and clearly sign-posted way for readers new to the subject. Another of the book's many strengths is the way in which it doesn't just focus on the obvious texts of Irish women's migration but comes at the subject from a more oblique and critically rewarding angle and by doing so provides new and enriching perspectives. In particular, it demonstrates how representations of Irish women migrants' identities are enmeshed within complex discourses of paternalism and exclusion that permeate Irish literature more generally. I also liked the way in which novelists' non-fiction work is used, wherever possible, to contribute to the book's overall analysis. Other strengths are the excellent literature reviews throughout and the way in which the analysis is contextualized within not just Irish but English literary traditions. A timely and valuable contribution to Irish Studies on both sides of the Atlantic." Tony Murray, Director of the Irish Studies Centre and Curator of the Irish in Britain Archive at London Metropolitan University, UK

"McWilliams's treatment of the field of the contemporary Irish novel is detailed and comprehensive, dealing with two key novels each by Julia O'Faolain, Edna O'Brien, John McGahern, William Trevor, Colm Tóibín, and Anne Enright. McWilliams's readings of Enright and Tóibín in particular are nuanced and compelling in many ways; for example, the use of historical sources concerning the differences between Irish women's experiences in the USA and Britain is especially productive and has some interesting implications for the novelistic form. By isolating and focusing on the theme of female emigration in the Irish novel, McWilliams has usefully defined a new field for critical investigation... Her study will no doubt facilitate and stimulate further debate on questions of women, the nation, travel and modernity in Irish writing." Professor Emer Nolan, Irish Studies Review

"For much of the 19th and 20th centuries, Irish people left Ireland in large numbers, settling all over the world but often still considering Ireland 'home' and thinking of themselves as exiles, not merely emigrants. While Ireland remained alive to them and to their descendants, they did not figure as much in the popular imagination in Ireland itself until fairly recently. Indeed, as Ellen McWilliams notes in this excellent book, the shame associated with emigration resulted in a notable silence about this diaspora at home in Ireland until quite late in the last century. Although most of these novels have been the subjects of considerable critical analysis, they have not previously been studied from this specific standpoint. In bringing these texts together and focusing closely on what they individually and collectively suggest about the experience of exile for Irish women, McWilliams makes a major contribution to the study of contemporary Irish fiction as well as to the study of the Irish diaspora. McWilliams's readings of the fiction are insightful, nuanced, and persuasive. Although this is certainly a scholarly book and McWilliams shows a broad and deep understanding of an enormous range of scholarly and theoretical texts, her writing is so direct and clear and her arguments so carefully made that I think this work will be of interest to and readable by many people outside of the field of literary study. Although I have read all the novels McWilliams discusses here, until reading her book I had not recognized that they share themes connected with Irish women and exile. In short, McWilliams gave me a new way of thinking about this fiction, which is exactly what we hope for when we begin reading a scholarly work but all too seldom find." Professor Maureen Reddy, Journal of Interdisciplinary Feminist Thought