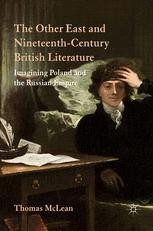 The Other East and Nineteenth-Century British Literature

Imagining Poland and the Russian Empire

THOMAS McLEAN is Senior Lecturer in Nineteenth-Century British Literature at the University of Otago, New Zealand. He is the editor of Further Letters of Joanna Baillie (2010).

"Turning to the profound but largely overlooked impact of Eastern Europe and Northern Asia on British literature and culture of the nineteenth century, The Other East compels us to consider another imaginative locus of the Empire on which the sun never set. The book's sensitive treatment of Poland and Russia as they are imagined and used in well-known and understudied works by the likes of Blake, Byron, Campbell, Coleridge, Conrad, Eliot, and Wollstonecraft will have scholars and students rethinking what we thought we knew about the global perspectives and reach of this era's literature. Thomas McLean's impeccably researched, highly persuasive, and original book is at once a formidable contribution to our scholarship and a delight to read." - Devoney Looser, Professor of English, University of Missouri Columbia, USA

"Thomas McLean's The Other East and Nineteenth-Century British Literature: Imagining Poland and the Russian Empire is another contribution to postcolonial studies that addresses an often-overlooked strand of British imperial discourse its representation of Eastern Europe. McLean examines the 'evolving image of the Polish exile' (p. 2) in relation to the Russian Empire in works by such Romantic and Victorian writers as Blake, Coleridge, Byron, Mary Shelley, Alfred Tennyson, George Eliot, and Conrad." - Studies in English Literature 1500-1900