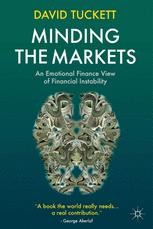 Tuckett argues that most economists' explanations of the financial crisis miss its essence; they ignore critical components of human psychology. He offers a deeper understanding of financial market behaviour and investment processes by recognizing the role played by unconscious needs and fears in all investment activity.

DAVID TUCKETT is Fellow of the Institute of Psychoanalysis and Professor at University College London, UK. Recently honoured with a Sigourney Award for Psychoanalysis, the highest prize in the field, Professor Tuckett has brought together his initial training as an Economist with his subsequent work in Sociology and Psychoanalysis to initiate a new line of research; the significance of which has been recognised with recent invitations to speak at the Global Economic Symposium and the Global Risks Network of the World Economic Forum. Previously Principal of the Health Education Studies Unit at Cambridge University and Editor in Chief of the International Journal of Psychoanalysis, he is the author of many papers and several highly successful books.

'Minding the Markets is a real contribution... a book the world really needs.' - George Akerlof, Nobel Laureate and American Economist

'Read this book if you want to understand the behaviour of financial markets.' Mervyn King, Governor of the Bank of England

'David Tuckett's work on the emotional underworld of asset management and financial markets is a true tour de force... As psychoanalyst, exceptional interviewer and rare interdisciplinary scholar he has brought sensitivity and sensibility to a world of unreason.' - Neil J.Smelser, University Professor of Sociology Emeritus, University of California, Berkeley, USA; and former Director of the Center for Advanced Study in the Behavioural Sciences in Stamford, California and President of the American Sociological Association (1997)

'This book is a treasure trove of pathbreaking and as yet unexplored ideas. Once they enter mainstream economics and politics, both the academic discipline and policy decision making will undoubtedly change. The book is written by a courageous and insightful psychoanalyst whose understanding of economics is profound enough to know that economists have overlooked things of vital importance: the role of emotions, stories, states of minds, and our affective relationships with people, ideas and things. There can be little doubt that these neglected phenomena play an important role in financial crisis and many other economic events.' - Dennis J. Snower, President, Kiel Institute for the World Economy, Germany

'This thought-provoking book lets asset managers tell their stories and reveals a reality quite different from standard finance theory. Theirs is a world of uncertainty rather than known risks, of information overload, short-term thinking, and fear of loss and liability topped by euphoric dreams of fame. Unlike those behavioral economists who condemn emotions for impeding rational action, David Tuckett reproaches financial theory for ignoring uncertainty and its direct consequence, mental states of doubt, trust, or confidence. He argues that the standard theory itself is part of the problem, as illustrated by the financial crash of 2008. Yet this catastrophic crisis could also be an immense opportunity for a fundamental reform of policy as well as financial theory. Minding the Markets is a highly readable book that introduces the reader at first hand to the emotions and mentality of asset managers.' - Gerd Gigerenzer,Director,Max Planck Institute for Human Development,Berlin; and former Professor of Psychology,University of Chicago, USA

'This book by a psycho-analyst is one of the most original and thought-provoking analyses of the current financial crisis and the emotional underpinnings of financial market behaviour. It synthesizes the emotional thread running through past crises, such as the Tulip mania, Southsea Bubbles and dot.com manias. Compulsory reading for anyone interested in root-and-branch reforms in financial regulations.' - Andrew Sheng, Chief Adviser to the China Banking Regulatory Commission, Adjunct Professor Tsinghua University, Beijing and former Chairman of the Securities and Futures Commission of Hong Kong

'...fascinating reading...As someone who spent 20 years working as an economist in the fund management industry, I found much in it that rang true and I would strongly recommend it to economists working in the financial sector, or to anyone with an interest in how financial markets work.' - Tony Dolphin, Senior Economist, Institute for Public Policy Research, The Business Economist

'The book comes with stellar recommendations from leading economists which I am happy to echo...this study is a powerful reminder to all economists and market participants of the complexity of human behaviour and should act as a spur to more work by psychoanalysts, economists and others, preferably together.' - John Grieve, Senior Advisor to GLG/ Deputy Governor of the Bank of England, 2006-09, Journal of Analystical Psychology

'Tucket offers a deep understanding of financial market behaviour and investment processes by recognising the role played by unconscious needs and fears in all investment activity. He lays emphasis on the importance of the critical components of human psychology.' - Organiser