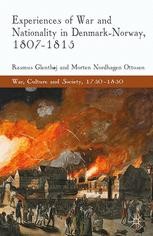 Experiences of War and Nationality in Denmark and Norway, 1807-1815

This book explores the impact of the Napoleonic wars on Danish-Norwegian society and accounts for war experiences and the transformation of identities among the popular classes and educated élites alike.

Rasmus Glenthøj is a Postdoctoral Fellow at the University of Southern Denmark. He has previously worked at the Royal Library in Copenhagen and the Danish Folklore Archives. Glenthøj received the Ministry of Sciences' Elite scholarship grant in 2009 and has written extensively on Scandinavia in the 19th Century.

Morten Nordhagen Ottosen is Researcher at the University of Oslo, Norway. His works include Popular Responses to Unpopular Wars: Resistance, Collaboration and Experiences in Norwegian Borderlands, 1807-1814 (2012), Samfunn i krig. Norden 1808-09 (ed. with R. Glenthøj, 2012), and Napoleon's Europa, 1799-1815 (forthcoming).

“It is also the first book to look at the two countries from a comparative perspective, placing its history within the larger Scandinavian as well as international context. … Morten and Ottosen are to be thanked for providing English-speaking readers with an accessible history of one of the turning points in Scandinavian history, a period that laid the foundations for the Scandinavia with which we are familiar today.” (Philip Dwyer, European History Quarterly, Vol. 46 (2), 2016)

“This important study by Rasmus Glenthøj and Morten Nordhagen Ottosen is extremely welcome. They have written the first truly scholarly and exhaustive English-language monograph on the composite Empire of Denmark–Norway during the Napoleonic Wars. … a fascinating and profound book which will enrich the horizons of established scholars and advanced students of the Napoleonic Wars. It also makes a notable contribution to the thorny and highly complex question of national identity during the nineteenth century. A tour de force!” (Ambrogio A. Caiani, English Historical Review, Vol. 130 (547), December, 2015)

“This volume achieves its objective in both filling a need for more on Scandinavia in the Napoleonic era, and above all in increasing our understanding of state formation and nation building in this formative period of European history.” (Michael Rowe, Scandinavica, Vol. 54 (1), 2015)

“A particularly warm welcome should be given therefore to this original, scholarly and illuminating monograph, which deals with a neglected but important part of Europe. … it is well told and opens up a whole new dimension of the Napoleonic wars.” (Tim Blanning, Sjuttonhundratal Nordic Yearbook for Eighteenth-Century Studies, 2014)