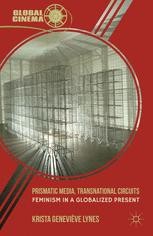 Feminism in a Globalized Present

What are the political and aesthetic dimensions of video art, documentary, and global cinema in contemporary image culture? Lynes makes visible how sites of political struggle, exploitation, and armed conflict can be interpreted through a feminist politics of location, attentive to the frictions and flows within transnational circuits of exchange.

"Krista Lynes' Prismatic Media, Transnational Circuits unties the vexed knots joining experimental visual media and situated political struggles, including controversial feminist strategies for making women potent as subjects in local and trans-local worlds. Her knowledge of diverse practices and materials in specific historical ecologies across zones of sharp conflict is impressive. She makes keen theoretical arguments expressed with passion, clarity and power. Lynes examines how heterogeneous visual media produce the fraught visibility of women in law, culture, and politics. She shows how global audiences get constructed and operationalized through visual imaging at local sites of political struggle, especially where the abuse, exploitation, and agency of women are in play and at stake. The complexity and urgency of Lynes' subject compel the reader. In short, this is a vivid, innovative, and important book." - Donna Haraway, Distinguished Professor Emerita, History of Consciousness Department, University of California, Santa Cruz, USA

"The exposure of the mechanisms of power in dominant visual culture is executed in an exuberant and non-linear way and from a transnational perspective through an extensive use of optical metaphors such as 'prismatic', 'refraction', and 'diffraction'. Lynes skillfully and confidently compounds semiotics and structuralism to feminism and complicates the binary visibility/invisibility by shedding more light on the emergence of complex vision in contemporary moving-image media and the existing different modes of representation in conflict zones." - Suzana Milevska, visual culture theorist and curator, Skopje, Macedonia