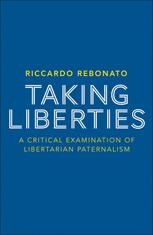 A Critical Examination of Libertarian Paternalism

Riccardo Rebonato offers a critical analysis of the Libertarian Paternalist approach that has taken the political landscape by storm. This book explores the justifications used by states to influence behaviour, and the impact of such policies on individual freedoms and rights, opening up new avenues of criticism.

DR RICCARDO REBONATO is Visiting Lecturer in Mathematical Finance and Applied Mathematics at Oxford University, UK, and Adjunct Professor at Imperial College London. He is on the editorial board of many journals in finance, including the International Journal of Theoretical and Applied Finance and Applied Mathematical Finance, as well as the author of several books on finance and risk management. He has been head of research at various financial institutions. Currently he is Global Head of Rates and FX Analytics for a major international asset manager, PIMCO.

'A remarkably clear account of a crucial strand in today's political thinking and a sharp critique of its foundations' - Donald MacKenzie, Professor of Sociology, University of Edinburgh, UK

'Rebonato carefully exposes the subtle flaws in the libertarian paternalist program. He shows how libertarian paternalists, despite their pretence of promoting the 'true' preferences of people targeted by their policies, nevertheless take sides by unjustifiably favouring some preferences over others while failing to adequately respect personal autonomy in decision-making.' - Glen Whitman, Professor of Economics, California State University, Northridge

'Two objections to libertarian paternalism are commonly made. The first denies the more reckless claims its proponents make for the robustness of their supposed discoveries about human psychology. The second objects to their naive political philosophy. This elegant and learned book puts libertarian paternalism on the rack on the second count. Anybody tempted to join the current fad for libertarian paternalism should read this book first.' - Kenneth Binmore, Professor Emeritus of Economics, University College, London

'Taking Liberties provides an exceptionally clear, thorough and fair analysis of the concept of libertarian paternalism. But Rebonato's analysis goes much further than a dissection of libertarian paternalism: Rebonato identifies crucial normative and empirical questions that any attempt to apply behavioral economics to real world settings must confront. This book should be required reading for would-be nudgers and students of behavioral economics.' - Gregory Mitchell, Mortimer M. Caplin Professor of Law, University of Virginia, USA