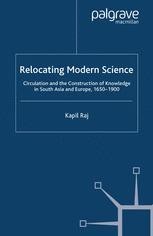 Circulation and the Construction of Knowledge in South Asia and Europe, 1650-1900

Relocating Modern Science challenges the belief that modern science was created uniquely in the West and was subsequently diffused elsewhere. Through a detailed analysis of key moments in the history of science, it demonstrates the crucial roles of circulation and intercultural encounter for their emergence.

KAPIL RAJ teaches at the École des Hautes Études en Sciences Sociales, Paris and is a member of the Centre Alexandre Koyré for the History of Science. He has published extensively on knowledge construction through processes of intercultural encounter and is currently working on a book on the urban and intellectual dynamics of Calcutta in the 18th century.

'Each of Raj's episodes is lucidly written, thoughtfully illustrated, and so adroitly contextualized that the book could be recommended to classes introducing students to the topic of 'science and empire' as well as to all scholars interested in how knowledge changes as it travels.' - The British Journal for the History of Science

'Relocating Modern Science is an important and thought-provoking book, which will no doubt encourage others to take a similarly un-blinkered approach to understanding scientific encounters in India. The author has done scholarship a great service by demonstrating the inappropriateness in many instances of conventional categories of analysis.' - Mark Harrison, Metascience

'Well-written, thought-provoking and likely to be of interest to those with more specialist interests in the regions in question as well as to scholars working on particular practices or personnel or on other regions.' - Charles Withers, Journal of Historical Geography

'Relocating Modern Science...makes possibly the clearest statement so far of the thesis that the history of science should be an account of how knowledge was made through interactions and not of how knowledge was transplanted...The friendly style, liberal and effective use of images, an eye for the dramatic moments in narratives, a forceful and convincing argument, and the fascinating case studies (some of which involved considerable detective work in the archives) make this book a rewarding and enjoyable read.' - Tirthankar Roy, Journal of Global History

'Relocating Modern Science is a theoretically exciting contribution that deserves to be read very widely. This book is a stimulating read..Raj is a polemicist who is confident enough to critique the work of other scholars, which means that his book is a brave one. Relocating Modern Science is certain to take an important place in the reading lists of scholars and students of science and globalization. It will also set a new and important point of reference for further debate.' - Sujit Sivasundaram, Isis