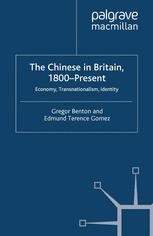 The Chinese in Britain, 1800-Present

This study points up the complex interplay of ethnic and national identities in the lives of Chinese in Britain, arguing that transnational studies reinforce essentialist conceptions of identity and cultural authenticity in diasporic communities, and thus frustrate the promotion of ethnic co-existence and social cohesion in multi-ethnic societies.

GREGOR BENTON  has affiliations with Cardiff University, the University of Malaya and the Autonomous University of Barcelona. His publications include Mountain Fires: The Red Army's Three-Year War in South China, 1934-1938, Diasporic Chinese Ventures: The Life and Work of Wang Gungwu, New Fourth Army: Communist Resistance along the Yangtze and the Huai, 1938-1941 and The Chinese in Europe (Palgrave Macmillan, 1997).

EDMUND TERENCE GOMEZ is Professor at the Faculty of Economics & Administration, University of Malaya. His publications include Malaysia's Political Economy, Chinese Business in Malaysia, Political Business in East Asia and Chinese Enterprise, Transnationalism and Identity.

'The study reveals a greater complexity to Chinese life in Britain than has been assumed to be the case, and clearly shows how a distinct identity has emerged and is now threatened, as young modern Chinese rely less on ethnic customs forged over the last century. The book also provides a useful case study of exclusionary practices of the dominant white society in Britain, and how they have influenced, for good and bad, British Chinese identity.' - CHOICE

'A reawakening, a rejection of infatuation with fashionable theories and concepts. The authors have stayed close and true to the studies of Chinese diaspora...Thus, the book is a valuable contribution towards to the understanding of similarities and more importantly diversities among Chinese communities.' - Yow Cheun Hoe, East Asia

'The most ambitious publication to date about the often overlooked Chinese population. The work offers a blend of history and anthropology that combines empirical depth with analytical perceptiveness. It demonstrates an unparallelled historical depth of scholarship. The book places Chinese in Britain in comparative context with Chinese migrants in other parts of Europe and North America. The authors' critique of transnationalism offers a starting point for a wider reflection on the state of Chinese migrant studies today.'

'A major breakthrough in the study of European Chinese history and society that deserves a close reading by anyone interested in diasporic Chinese affairs. I suggest the authors and publisher consider bringing out a Chinese version to benefit those with no English.'

'A comprehensive survey of the social and economic experiences of this group in an often unwelcoming host society. While the book's primary intended audience is scholars of the sociology of globalization and transnational studies and its primary focus is the twentieth century, there is much in this clearly written, thoroughly researched, and theoretically provocative account to interest a wider readership in Victorian studies. As we once again enter an era marked by profound ambivalence regarding China's role on the world stage, Benton and Gomez's work provides a timely antidote to all-too-common assumptions regarding the supposed ethnic unity of the Chinese and the historical novelty of their current economic prominence in national and international affairs.'

'The first comprehensive study of the long history of Chinese migration to Britain. It corrects many misunderstandings in transnational studies and is a must-read for those studying Chinese migration, transnationalism, Chinese identity and British-Chinese relations. It will also be important for those who take an interest in Chinese business practices in Britain.'

'Does a great job of providing an unusually rich amount of detail on the Chinese historical presence in Britain.'

'The most substantial monograph on the Chinese in Britain to date.'