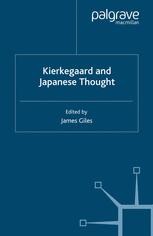 "The affinities between Kierkegaard's thought and elements in Japanese religion, philosophy, and culture have long been noted. Until now, however, the relationship has rarely been subjected to sustained scrutiny -at least, not in Western literature. This collection therefore makes a unique and truly important contribution to a discussion that will enrich both Kierkegaard studies and the wider cause of dialogue between Japanese and Western philosophy. Controversially rejecting the claim that Kierkegaard needs to be assessed against his own theistic background, James Giles introduces a range of contributions that reflect Zen, Pure Land, and Shint? views of life, and that engage both classic Japanese figures such as D?gen as well as modern writers and thinkers such as Kobayashi and Hisamatsu. This stimulating and thought-provoking collection will surely come to provide a point of departure for all future studies in this area." George Pattison, University of Oxford, UK, author of The Philosophy of Kierkegaard

"This work concentrates on unexpected connections between Kierkegaard's philosophical writings and Japanese thought with respect to such fundamental themes of human existence as the nature of freedom, self-deception, love, compassion, death and dying, the individual and society. It is a worthy undertaking in comparative philosophy carefully crafted by its editor James Giles. It should deepen our understanding of an extraordinary Western religious-philosophical figure and various strains, primarily Buddhist, of a major East Asian tradition." Eliot Deutsch, University of Hawaii, author of Persons and Valuable Worlds: A Global Philosophy