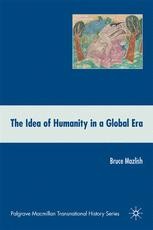 The Idea of Humanity in a Global Era

The result of a lifetime of research and contemplation on global phenomena, this book explores the idea of humanity in the modern age of globalization. Tracking the idea in the historical, philosophical, legal, and political realms, this is a concise and illuminating look at a concept that has defined the twentieth century.

BRUCE MAZLISH is a Professor Emeritus of History at MIT, USA.

"If, in the course of this century, homo sapiens fails to identify himself/herself with all of humanity (rather than with political ethnicity or religious exclusivity), a global catastrophe is likely. Mazlish's timely work is a signal that a profound redefinition of our collective identity is now urgently on the agenda." - Zbigniew Brzezinski "In this concise, compelling, thoughtful and timely book, Bruce Mazlish, the eminent historian of globalization, has performed a great service to humanity. By subjecting that word and the evolving concept for which it stands to rigorous and imaginative analysis, he has helped us see more clearly what it will take to ensure human progress - and survival." - Strobe Talbott, author of The Great Experiment: Ancient Empires, Modern States, and the Quest for a Global Nation

"In this deeply moral and impassioned exploration of the concept of Humanity in the context of present-day processes of globalization, Bruce Mazlish traces the various strands that have contributed to an emerging idea of Global Humanity. In a period when genocide, terrorism, and torture appear to be spreading, this is an important and timely book that should be read by all who care about the implementation of just and equitable standards of conduct throughout the world." - Gabrielle M. Spiegel, Johns Hopkins University; President, American Historical Association "A noted historian of ideas, Bruce Mazlish has been a leader in establishing global history as a distinctive field of study. In this essay, he combines those interests with a life-time of scholarship on modern history to address a remarkable array of current concerns. All are placed in the context of globalization, which Mazlish sees as a change in the way human beings view each other. These personal reflections become, as he notes in passing, "a moral exhortation;" and they will surprise and stimulate his readers." - Raymond Grew, University of Michigan