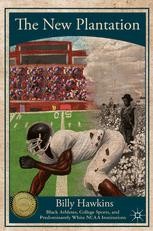 The New Plantation examines the controversial relationship between predominantly White NCAA Division I Institutions (PWI s) and black athletes, utilizing an internal colonial model. It provides a much-needed in-depth analysis to fully comprehend the magnitude of the forces at work that impact black athletes experiences at PWI s. Hawkins provides a conceptual framework for understanding the structural arrangements of PWI s and how they present challenges to Black athletes academic success; yet, challenges some have overcome and gone on to successful careers, while many have succumbed to these prevailing structural arrangements and have not benefited accordingly. The work is a call for academic reform, collective accountability from the communities that bear the burden of nurturing this athletic talent and the institutions that benefit from it, and collective consciousness to the Black male athletes that make of the largest percentage of athletes who generate the most revenue for the NCAA and its member institutions. Its hope is to promote a balanced exchange in the athletic services rendered and the educational services received.

Billy Hawkins is Professor in the Department of Health and Human Performance at the University of Houston, USA. His teaching and research contributions are in the areas of sociology of sport and cultural studies, sport management, and sport for development.

"This is an informed, introspective, and insightful analysis of the experiences of Black athletes in predominantly White universities. From his vantage points as a former college athlete and a current faculty member, author Billy Hawkins shines a bright light on the ways that skin color, ideas about race, and the organization of major college campuses and athletic departments influence the lives of these athletes. Anyone wanting to know about the challenges faced by Black athletes as they navigate their way through a complex maze of academic, social, and sport experiences should read this book." - Jay Coakley, Professor Emeritus, University of Colorado at Colorado Springs, and author of Sports in Society: Issues and Controversies (10th edition, 2009)

"Hawkins' new book will likely become a classic on the racial dynamics of big-time collegiate athletics. By drawing parallels between colonialism, the American slave system, and the structure of the athletic-industrial complex, he makes a powerful case that America's predominantly white universities give far greater priority to exploiting the bodies of black male athletes than to developing their minds. Black athletes, argues Hawkins, are often viewed with 'amused contempt' by the White population they have been recruited to entertain. Hawkins acknowledges that racial progress has been made in America, but uses college sport as a poignant example of how institutional racism can perpetuate racial stereotypes." - Allen Sack, Professor, College of Business, University of New Haven and author of Counterfeit Amateurs: An Athlete's Journey Through the Sixties to the Age of Academic Capitalism

"Well organized and researched, richly contextualized, and effectively theorized, this book provides an important counterargument for those who see intercollegiate athletics as a road to social mobility and justice. . . . Summing up: Essential." - D.A. Nathan, Skidmore College, December 2010 Issue of CHOICE