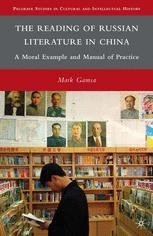 The Reading of Russian Literature in China

A Moral Example and Manual of Practice

This book traces the profound influence that Russian literature, which was tied inseparably to the political victory of the Russian revolution, had on China during a period that saw the collapse of imperial rule and the rise of the Communist Party.

MARK GAMSA is a Lecturer in modern Chinese history and literature at Tel Aviv University, Israel.

'This meticulously researched book, which draws on both Russian and Chinese archival materials, will be of great interest to all scholars looking for new paradigms by which to compare literatures and cultures.' - Slavic Review

'Mark Gamsa not only examines the Sino-Russian cultural encounter more closely than anyone heretofore has done, but also reflects on it perceptively from the viewpoint of a new century. While the implications of undervaluing the individual usually appear in the context of collectivization, industrialization, and other Communist Party led socioeconomic transformations, Gamsa calls attention to their importance in literature and art. His discussion leads on to interesting reflections on what literature is, whether it really can change society and history, and in what, if any, sense it can teach and guide readers. Reading, he thinks, is a one-on-one experience in which an individual writer speaks to an individual reader, often across distances of time and space, and even long after the writer's death. Literature is written by individuals for individuals. Its impact occurs in one mind at a time and is not a mass phenomenon.' China Review International

'...not only does the book shed new light on the study of modern Chinese literature in a comparative paradigm, but it also makes a unique and much-needed contribution towards a better understanding of Chinese intellectual history, Sino-Soviet relations, and intercultural exchanges at the state and personal levels.' - Yan Li, Northeastern University, Modern Language Review

'Despite the close ties between China and the Soviet Union, few sinologists in the West have so far been able to draw on a knowledge of both languages. Hence this is a welcome contribution, and one which can be developed further.' - Comparativ